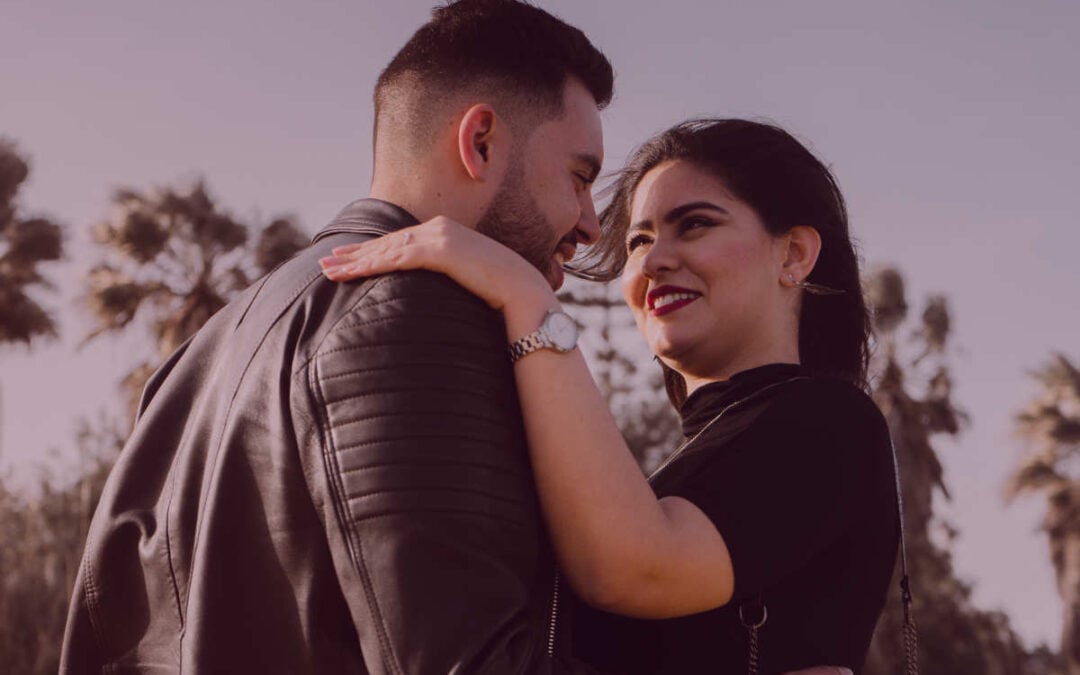 Dating a man who doesn’t want anyone else to have you but won’t admit it, can be very confusing.

One day, you can be over the moon about something he said or did. Only to have him tear it all down, as though he didn’t care about you at all!

I have experienced this kind of emotional roller coaster myself. My then boyfriend and now husband used to be an avoidant who struggled with commitment issues.

Because of that, he would bombard me with mixed messages that were impossible to decipher at the time.

On one hand, it seemed like he was very much in love with me. But then he would pull away or say things like “You’re better off without me.”, which made me worry that he wasn’t really attached and would eventually leave.

A guy who doesn’t want anyone else to have you will give you just the right amount of encouragement to make sure that you continue chasing him.

But at the same time, he will remain doubtful and undecided as long as you let him!

In this blog post, I’ll help you recognize the signs that you might be stuck in this very situation. I’ll then give you tips on what to do to motivate him to finally make up his mind and openly commit.

1. He Makes an Effort to Impress You

One of the most obvious signs that a man doesn’t want anyone else to have you is when he keeps on trying to impress you over and over again.

He might do so by taking you out to fancy or expensive places. By cooking elaborate dishes, showing off his skills or strength etc. The possibilities are endless.

But don’t let him fool you.

He is trying to impress you so that you view him as the best possible catch because deep down he is attached and this is his way of making sure he can dominate all potential competition.

2. He Comes Back After Pulling Away

It’s not uncommon for guys to distance themselves or ask for space when you’re dating them or even in a relationship.

There are many reasons why men pull away. But, regardless of why he might be acting this way, observing the patterns in his behavior alone, can tell you a lot about whether he is actually emotionally attached or not.

The biggest sign that a man doesn’t want anyone else to have you is when he consistently keeps on coming back after pulling away.

He is comfortable with distance, but only as long as he can be sure that he is in control of the situation.

In reality, he is emotionally attached and wants to keep you in his life.

So when he senses that the connection might be beginning to fade, he will come back to rekindle the flame between you and make sure that you remain hooked.

3. He Is Kind and Considerate

There is nothing more confusing than a guy doing something incredibly considerate and caring and then claiming that it’s no big deal, and he would do it for anyone.

This might include him taking care of you when you’re sick, getting you groceries, helping out at the house, being there for you emotionally, being supportive etc.

Make no mistake, it’s not that you’re not special to him…

He is playing things down because he is having a hard time admitting (even to himself) that he is slowly falling for you.

When a guy is considerate or caring towards you, it’s a definite sign that he doesn’t want anyone else to have you.

A guy who opens up to you and lets himself be vulnerable around you will inevitably end up getting attached.

Him opening up is a sign that he trusts you more now. Because of this, he most certainly doesn’t want anyone else to have you, even if he claims otherwise and keeps on stalling commitment.

This is particularly common when you’re dating an avoidant. They’re the type to open up emotionally but play distant and refuse to chase you, no matter what.

Another easy to spot sign that a guy genuinely cares about you and wants to keep you all to himself, is when he answers your texts almost right away.

What’s more, him doing it most likely means he has been waiting for you to reach out.

Quite a few of our female coaching clients struggle with initiating contact. So if you’ve never tested this, now might be the time to do it.

It is perfectly normal for a girl to text a guy first!

And a man who responds right away definitely has a crush on you and doesn’t want anyone else to have you!

6. He Initiates Contact at Least as Much as You Do

This is a similar point to my previous one. When a guy matches or exceeds your efforts at initiating contact, it’s a sign he is genuinely interested and enjoys interacting with you.

We are all territorial and jealous, no matter what we claim. It’s just human nature.

So, just based on his interest alone, you can be sure that he doesn’t want anyone else to have you.

7. He Wards off Any Serious Competition

A common confusing move some guys like to pull is being all nonchalant about commitment, but then acting territorial when other guys are around.

They might tag along with you to parties or ‘accidentally’ bump into you there.

Only to make things more confusing, they’ll then get chatty and become best buds with your other male friends.

When this happens, make no mistake. It’s not a coincidence.

A guy does this to scope out all the competition and communicate to them that you are taken.

It’s not just a sign, but pretty much proof that he doesn’t want anyone else to have you.

8. He Isn’t Seeing Other People

Another common confusing situation so many of our coaching clients end up in is when a guy refuses to be in a relationship with you, but he isn’t seeing anyone else.

This kind of “unofficial” commitment is a sign you might be loving someone with an avoidant attachment style.

He is too doubtful or afraid to commit, but hopes that you’ll read between the lines and follow suit.

He likely will not dare to admit this, but deep down he is very much attached and doesn’t want anyone else to have you.

9. He Is Affectionate or Intimate With You

Surprisingly, some guys will have an easier time expressing their love for you through affection or intimacy, than with words.

They’ll be gentle, slow, playful, and vulnerable while kissing you or even in bed.

When a guy lets himself go there with you, it’s a sign he is opening himself up to you on a deeper level.

Even if he is hesitant with commitment, he is most certainly attached and doesn’t want anyone else to have you.

Yes, a man can sleep with a woman without developing feelings, but you’re not going to experience much intimacy or affection when this is the case.

10. He Says You’d Be Better off With Somebody Else

Last but not least, the most confusing of all the signs that a guy doesn’t want anyone else to have you is when he says that you’d be better off with somebody else.

Other variations of this are: “You’re better off without me.”, “You deserve better.” etc.

I know this might seem completely counterintuitive, but nobody EVER says something like this and actually means it.

He is just being emotional.

A guy who says something like this is so afraid of being abandoned, he is speaking his biggest fears out loud in the hopes that it’ll make them less painful or scary.

What he wants you to respond to this, is: “But I don’t want anyone else, I want YOU.”

He is basically indirectly asking you for reassurance that you care about him and won’t give up on him, even when he is struggling, being difficult or needs a relationship break.

I know for you, it might be heartbreaking to hear him say something like this, but you have to see through him and read between the lines.

How to Get Him to Show You That He Actually Cares

In order to feel safe and secure in your relationship, you require much more than just signs that he doesn’t want anyone else to have you.

You likely need him to SHOW you that he cares, is emotionally attached and wants to be exclusive.

There are two things you can do to make this happen.

On one hand, you can call his bluff by distancing yourself a little, acting as detached as he does etc.

You pulling away this way will give him a reason to need commitment.

But you have to be careful with this approach. Pushing him away and distance doesn’t always work. It can sometimes even do more damage than good.

This is where the second strategy comes into play.

Another way to get a guy to show you that he is emotionally attached is to make room for him to express his fear and doubts.

If you’re struggling with getting a guy to openly commit to you, I can support you with that in a coaching call.

Here, I’d carefully listen and help you make sense of all the confusing signs he might be bombarding you with.

I’ll also help you decide which of the above-mentioned approaches fits your situation better and give you tips on how to implement it.

I hope you now know how to tell when a guy doesn’t want anyone else to have you. To find more tips on how to get a guy to show you that he cares, check out my husband’s post: 4 Steps to Make Him Worry About Losing You

Thank you for reading! If you’re unsure about any of the signs, leave me a comment, and I’ll get back to you.