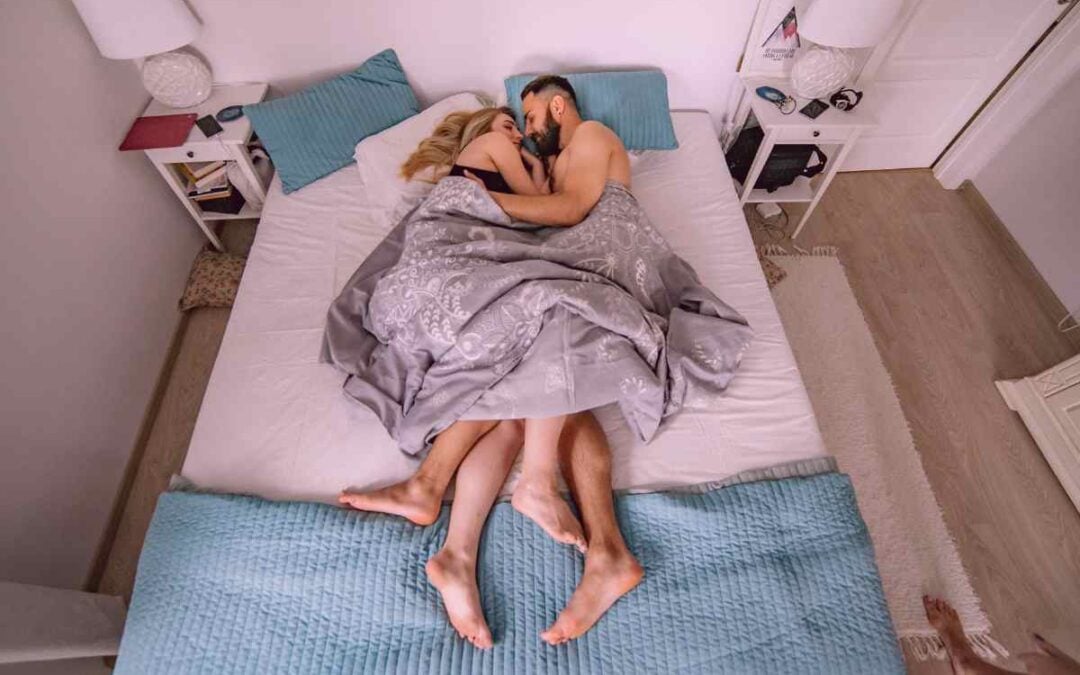 Can a man sleep with a woman without developing feelings?

The short answer is YES.

Yes, men can and do sleep with you without emotional connection.

Men do it all the time, all around the world.

In fact, I can tell you, as a guy, that it’s actually something men often take PRIDE in.

It’s about conquests, and sleeping with women is just another notch on their belt that they can brag about to their buds.

But, there’s a big BUT in all of this, though.

Men typically don’t develop feelings, BUT it’s because they’ve been conditioned to believe they have none.

And people don’t dare speak it out.

Because it threatens the familiar and established ways in which men sleep around to derive their sense of ‘self-worth’ and rank themselves amongst peers.

More on that later…

So if you plan on, or have already slept with, a guy you’ve caught feelings for.

Then this post will help you understand the underlying male psychology that prevents men from developing feelings for women.

And we’ll also talk about how to turn that around and make a man crave you emotionally.

How Do You Know He Just Wants to Sleep With You?

There are many indicators, but here are the top three to easily identify whether a man just wants to sleep with you superficially:

1. He’s instantly ready to sleep with you

One of the easiest ways to tell if a man is using you, is he’ll jump into bed with any woman right away, no questions asked.

Men that aren’t serious will have no boundaries when it comes to sex.

They will take any opportunity that crosses their path to fuel, what I believe to be, a misguided sense of self-worth.

So if you’re looking for a guy to connect with emotionally, you might want to consider passing on this type of man.

2. He doesn’t care to get to know you

Another tell-tale sign that he’ll sleep with women without developing feelings, is the LACK of effort he’ll make to truly know you as a person.

On the flip-side, players can be socially skilled and will mimic what resembles being curious about you, so watch out for those signs.

3. His focus is set on getting you in bed

How do you know if he only wants your body?

If every other thing he does or says is related to steering you towards his or your bedroom, then he just wants to sleep with you.

These men’s weakness is often their impatience, so you can easily identify them by suggesting you meet again.

If he’s a man who develops feelings, he’ll be up for it.

If he leaves at this point or pushes even harder to sleep with you tonight, then he’s not serious about his emotions towards women.

So check whether two or more of these signs fit, if so, he’s not the type to develop feelings and just wants to sleep with you.

Don’t waste your time on him.

How Do You Know When a Guy Is Emotionally Attached?

When a guy is emotionally attached, he’ll give you very different signs from an emotionally unavailable man.

For the most part, he’ll do the exact OPPOSITE of what a guy who just wants to sleep with women does.

And if you have already slept with him, he definitely won’t just ghost you.

Instead, he’ll want to spend MORE quality time with you and go on dates.

And in case you’re wondering how long it takes for a guy to catch feelings.

Know that it often takes longer with men…

Expect months (even years, I would know!) to go by for a man before he admits his feelings for you.

And now let’s get to the bottom of why that is and what you can do to change it!

Why It’s So Difficult for Men to Develop Feelings

At the beginning of this post, I mentioned that men often don’t develop feelings, because they’ve been conditioned to BELIEVE they have none.

And that this is because they think they have to fulfill the male standards of sleeping with a lot of women.

Naturally, developing feelings for you would make it more difficult to just move onto another woman…

So instead they deny and repress their emotions and continue on their misguided quest of trying to feel more confident about themselves.

You can think of it as men being in an endless competitive race of who has the highest body count of women.

And when they meet, they stack up against each other to determine who’s ‘The Man’.

The “winners” get to temporarily feel good about themselves and mistake it for confidence and feeling worthy of love.

And with a man of this mentality, any woman who asks him about his feelings for her, will be accused of trying to ‘tie him down’.

So that’s what you’re competing against, the misguided boys club.

But that’s a story for another time.

In cases like these, looking for signs that he’s fighting his feelings for you can help you read between the lines.

What Makes a Man Develop Feelings for a Woman?

Now that we’ve talked about the reasons men don’t allow themselves to develop feelings for women, the question becomes…

How do you make a man crave you emotionally?

First, you need to be clear about how removed he might be from how he feels.

Because some guys are so gone, they have zero capacity to truly connect with a woman, no matter how many times they sleep with someone.

And they will fight their own feelings for you to the grave.

So if he’s this type of guy, seriously, don’t waste your time.

Chemistry is not something you force between a woman and a man, it’s something that happens between them.

But if you’re sure that there was a spark between both of you, and he’s just denying it for the above-mentioned reasons, then you stand a chance!

Now, the trick to make a guy realize his feelings for you, is to play along with his silly games of remaining aloof and distant.

As previously mentioned, it takes TIME for guys.

It took me years to truly understand the depth of my attachment to Karolina (my wife, who runs this blog with me).

But when the chemistry is strong enough, he’ll gradually develop more feelings for you and show it.

Often in gestures, rather than words.

So if you’re crazy enough about this guy, be patient, stay by his side and know that he’s in denial of his feelings for you (for now).

This consistent behavior is what ultimately makes a man fall in love.

I of course hope it works for you guys.

But if after reading this, you’re riddled with uncertainty about his feelings for you, it might be helpful to see if the signs he isn’t into you fit for you.

Thank you for reading and I hope this post gave you some clarity on whether men can sleep with women without developing feelings!

If you have any questions, please leave them in the comments section, and I’ll get back to you.