4 Steps to Make Him Worry About Losing You 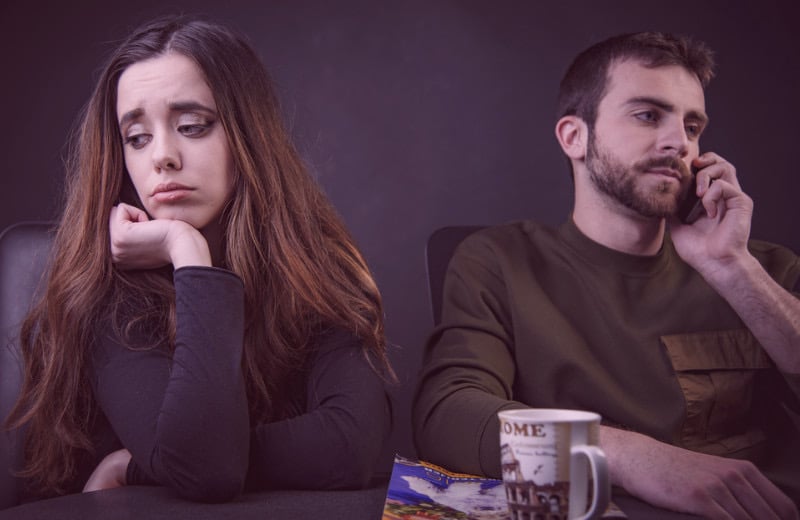 If your man is making it clear that he’s not worried about losing you, chances are it leaves you feeling like you don’t matter much to him…

Maybe you even feel unimportant to him and taken for granted.

He might treat you as though whether or not you are there, it wouldn’t even make a difference to him. Or worse he TELLS you that he doesn’t care!

And of course that hurts…

It’ll leave you angry and sad because even the strongest girlfriends eventually can’t take it anymore and just want to give up.

I know this because Karolina (my girlfriend who runs this blog with me) had the same complaint about me in OUR relationship.

But we DID eventually manage to solve this tricky problem.

And yours can be fixed too!

I’m going to tell you what you need to do to turn things around and get him to treat you like you DO MATTER and ARE important!

Let’s talk about how to make your man worry about losing you.

1. Don’t Hope That He Will Change and Finally Start Appreciating You

Karolina was incredibly patient with me in our relationship, one might even say too patient at times…

And we’ve observed the same tendency with other couples.

It’s as though there is an unspoken rule for women: that they are expected to be endlessly giving and patient.

And that by trying to live up to an impossible angel-like standard they will somehow magically inspire the change they desire in their men, so that he’ll finally care about you.

Now let’s look at the reality of trying this approach:

This approach does not work, because you would be giving him even more room to continue his behavior.

“Hey honey, it seems as though you don’t worry about losing me… here let me help you worry EVEN LESS!”

So if you find yourself in this kind of pattern of waiting and hoping for him to change by being the ‘perfect angel’, it’s important to take charge instead.

Because this problem will not resolve itself.

Taking charge of your relationship is the only thing that will truly result in your man’s behavior changing.

And it’s the experience Karolina had with me as well!

It’s only when she stopped waiting or being patient and took charge, that she started getting the appreciation and attention she wanted!

2. Stop Coming His Way the Whole Time, Match His Efforts Instead

Do you ever have the feeling you’re accommodating men? Like even your boyfriend or husband?

Maybe when he’s saying something that may be of very little interest to you, you still find yourself politely nodding, smiling and feigning interest?

If so, let me tell you this is something us men are unfortunately very used to and BLIND to as well!

We like to think our partner is truly interested and blown away by whatever it is we’re currently flexing about.

But when it’s your turn to be heard, he might cut you off mid sentence.

Or maybe he ignores the fact that you just said something to begin with!

This behavior is unfortunately common…

I don’t know where us men get our sense of entitlement from, but it definitely has a negative impact on our relationship!

So instead of coming his way the whole time, MATCH his efforts instead.

Give only as much as he’s giving you.

Whether that’s in conversation, texting, in bed, chores or any other area of life.

Match however much effort he is putting in and DON’T put in more than that!

This will shake things up for him, he’ll realize that you can CHOOSE how much of your time and attention you give him.

That it’s not guaranteed and that he has to earn it!

[A word of caution: Be careful not to fall into the other extreme of distancing yourself and not giving anything at all! Because this will signal that you are no longer interested in him and can even reinforce his lack of worry about losing you!]

3. Get Busy Pursuing Your Own Interests

There is nothing more vexing and simultaneous attractive to us men than a woman doing her own thing.

We like to be the most important thing in our girlfriend’s life.

King of the castle, master of the universe and any other cliche you can think of!

And when we’re not the center of everything –a primitive caveman ALARM BELL goes off.. :

“Why is this other thing of more interest to her now? How dare she prioritize getting her nails done over dinning with me?! What is this rebellion? It seems I must pursue and court her again!”

You know, like Belle in Beauty and the Beast -only without the whole captivity and talking furniture thing.

I’m exaggerating a little here because I want to get this POINT across.

There is something very frustrating yet stimulating to a man when his partner goes off doing her own thing!

Karolina would be at social events, hanging out with friends or even taking on drawing classes at some point.

And I couldn’t have her out there having all the fun to herself! And besides what if she meets an interesting guy??…

You get the idea.

So pursuing your own interests will keep your man on his toes and more interested in you again!

4. Restructuring Your Relationship Will Make Him Worry About Losing You

…Then there’s MORE to it than meets the eye.

This kind of unfair treatment doesn’t appear out of nowhere. It stems from issues in a relationship that lie beneath the surface.

These are problems that are often old and buried because they’re just too scary to face!

But at some point the pain is too big to continue ignoring and you wake up and realize:

“Hey, he’s not even worried about losing me anymore! He takes me for granted!”

What’s needed at this point is to restructure your relationship to make him actually wake up and be afraid of losing you.

Since Karolina and I both KNOW these struggles and learned how to overcome them, it became important to us to share our experience and help other women overcome them too.

So If you’re feeling unappreciated and unimportant and could do with some help fixing it, be sure to check out our course that we designed especially for women in your situation: Rebuild Your Relationship.

In it, you’ll learn actionable steps to immediately capture his undivided attention, as well as the secrets to get him to truly value and appreciate you the way you want and need, so that he DOES finally worry about losing you.

Finally, there is also a flip side to the whole issue of men not worrying about losing their partner…

Which is that he might straight up be the emotionally unavailable type!

If you’ve found yourself chasing him to meet your relationship needs (which you very well deserve to have!) and when you express them, his response is equivalent to that of a rock. Then you probably find our post about how to get emotionally unavailable men to open up insightful.

If you have any further questions or you’re not sure about something, just drop me a comment below and I’ll get back to you!