How to Give Him Space the Right Way – 5 Powerful Tips 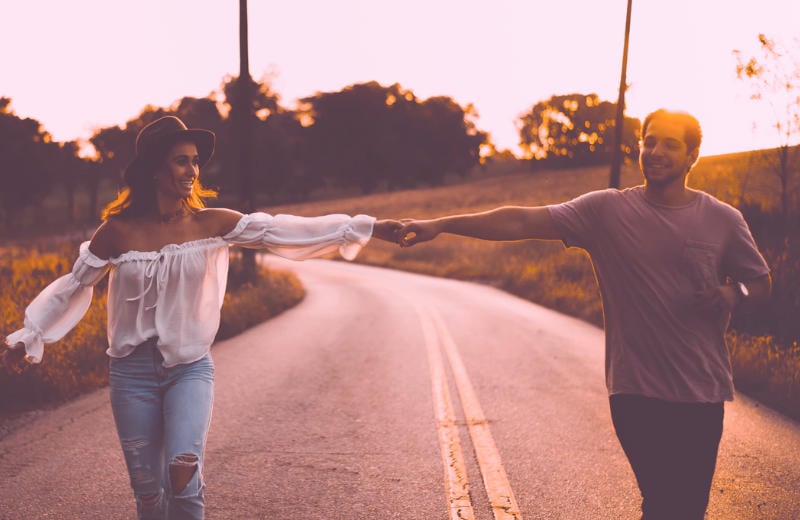 When a man starts to withdraw or pull away, a lot of women often start to panic and try to immediately do whatever they can to reel him back in.

I get it… I used to react exactly the same way…

Having someone you can’t get enough of suddenly asking you for space or to be alone, it feels WRONG!

When we first started dating Gabriel used to “Need space.” A LOT.

Because of that, he’d stop texting and we wouldn’t see each other for a couple of days.

Back then I always tried playing it off as cool but deep down I always felt rejected and alone.

Now, 10 years later, we HARDLY EVER need space from each other.

Looking back at all those times in our past when Gabriel needed space… I can now see very clearly why he was acting the way he was.

Moreover, I can see the same patterns with all of my girlfriends with their boyfriends or even husbands!

I’m going to share with you the three surprising truths I learned about why men suddenly pull away and give you tips on what you can do to actually bring them closer.

1. The Real Reasons He Is Pulling Away, Have Nothing to Do With You

Blame herself and feel like SHE must have done something WRONG!

But the reality is, it’s often a sign of the complete opposite.

A lot of men are AFRAID of BEING ATTACHED!

Chances are you and your man are getting CLOSER and his defensive walls are beginning to CRACK.

But he isn’t ready to fully let you in yet!

So he suddenly needs to spend some time apart so that he can get those walls back up.

This is something most men aren’t aware of.

They’re not doing it out of spite or trying to intentionally reject you.

It’s just that they don’t trust you enough yet and are afraid of being hurt.

Another big reason why men pull away at the beginning of a relationship is when they’re not doing well and are trying to hide it.

When two people start dating, they generally always try to only show their BEST SIDE to their new partner.

Additionally, there is a lot of pressure on men to always act strong and pretend to have it all figured out.

But everybody feels down every now and then.

And men DON’T have it all figured out.

Chances are your guy doesn’t want to show you when he is not doing well because he is afraid of being judged or rejected.

So he decides to simply WAIT for the bad mood to pass before seeing you again.

Regardless of what his exact reasons are for suddenly pulling away, most likely they have nothing to do with you.

So don’t go blaming yourself here.

2. Avoid the Common Mistakes That Make Men Even More Distant

I know from my own experience that a man suddenly pulling away awakens this SUPER-STRONG urge to try to desperately cling onto him.

Unfortunately, following that urge will most likely make your boyfriend even MORE DISTANT.

It’s important to respect his need for space.

Don’t try to violate it by constantly texting him or finding excuses to pop by his place.

Trying to force a man to let you in, when he doesn’t feel ready for it, will only make him PULL AWAY MORE.

No one likes to be controlled. These kinds of behaviors can even drive men away for good.

3. Bring Him Closer By Providing The Space He Needs

I know, it’s hard to resist that urge to try to cling onto your boyfriend, even though he said he needed space.

I used to try all sorts of tricks to try to lure Gabriel back in.

Once I even baked blueberry muffins especially for him.

He still didn’t want to come over, but I DIDN’T INSIST and ended up eating them with a friend.

I decided to save him one though and he actually came by one the next day and said it was very delicious.

It’s tricky, but trying to trick or force a man into opening up will do more damage than good.

Because there are often reasons he’s being distant towards you that even he’s not aware of!

On the other hand, patience and acceptance of where they’re at are going to bring them CLOSER FASTER.

4. Distract Yourself and Make Him a Bit Jealous

The best way how to give him space is for you to distract yourself with somethings else. Meet up with friends, pick up a hobby, start working out etc., possibilities are endless.

Having something to do will take your mind off of him.

You’re not going to be just sitting around, obsessing over what he is doing and wondering if it’s ok to text him yet.

There is an additional benefit to following this tip. You having a life of your own, your own friends and interests will inevitably make him at least a bit jealous.

Which in turn will motivate him to need less space. Because, he’ll have to come out of his shell to fend off any potential competition.

5. Win Back His Trust by Being There for Him

Last but no least, when giving space women tend to do it backwards. I’ve made this mistake myself, countless times too. Whenever Gabriel would start pulling away, I’d need him to reassure me and show me that he cared.

It’s ok to ask for reassurance in a relationship. But when a guy is struggling with something, he will not have room for you and what you need from him.

This is the very reason why he might be asking for space in the first place!

Because he just can’t cope with things at the moment.

This is why the best way how to give your boyfriend space in these kinds of situations is by not needing anything from him but being there for him instead.

Listen to him, validate his complains, be nice and understanding. Bring him food. Don’t judge him. Don’t ask for answers, don’t pressure him to get his life together.

Be kind and patient towards him and his walls will drop in record time.

How Much Space Should You Give Him

How long you should give him space strongly depends on your individual preferences and also on the stage of your relationship.

Some people need more space than others. But generally speaking, the longer you are together, the shorter you have to wait before getting back in touch with him.

For example, in our first year of being together, when Gabriel said he needed space, I typically waited a couple of days, up to a week, before texting him.

We weren’t living together yet and our lives were still very independent of each other, so I really could just go about my life without any major problems.

Now, on the other hand, we live together, work together, our relationship evolved and so have our rules for space. When Gabriel says he needs space now, he typically means something between 30 minutes up to an hour.

There are no fixed rules here.

Exactly how long you should wait for also depends on the circumstances and his reasons for needing space in the first place.

We actually have another article that covers this in quite a bit of detail: How Long Should a Break In a Relationship Last

Can There Be Too Much Space in a Relationship

Knowing how to give a man a healthy amount of space can be tricky.

You don’t want to appear desperate, needy and push him further away. But at the same time, you also don’t want to seem distant and make him feel like you don’t care.

As mentioned, the biggest mistake women make when it comes to space is being clingy.

The second-biggest mistake is giving more space than what he asked for.

So take care to dose it carefully, so that he doesn’t feel like you’re disinterested.

Another challenge here is evaluating where he is really at.

Are you giving him space to figure out what he wants, or is this just his excuse for stringing you along?

It’s a complex topic and there are many factors to consider. But there are two things that can really guide through this mess and help you know how much space to give him: your gut and your heart.

If something feels off, don’t ignore it. At the same time, if a man is demanding more space than you can bear to give, tell him that.

When a man truly cares about you, he will take you into consideration and will make room for your needs too.

When a guy suddenly voices the need to have some space, it’s easy to get carried away and panic.

That’s why it’s important to remember: this is most likely not your fault.

Him needing space probably has NOTHING to do with you.

Don’t try to trick or force him into opening up.

That will only make him withdraw even further.

Do your best to accept and respect where he is at and he will come back to you sooner than you imagine.

Also if you’re curious to know how we overcame the problems in our relationship, be sure to check out our story.

Now when it comes to guys asking for space in relationships there are often reasons that go beyond a recent event that caused it.

Sometimes there are underlying issues that you (and sometimes even your boyfriend or husband) are utterly unaware of -that are causing a need for space and addressing these issues is the only way to actually solve the problem.

This is what we dig into, in our Rebuild Your Relationship Course.

Here we talk about the reasons men distance themselves and sometimes even bunker themselves in and what to do to get them back out and have them reconnect with you instead.

I know how difficult this can be because I had the same struggle with Gabriel (my boyfriend who runs the blog with me). It took a long time before I finally figured out what I was doing wrong (things that were continuously pushing him away) and what I needed to do to solve this!

Now, he not only never needs space, he actively seeks me out and talks to me when there’s a problem so that we can figure it out together.

And in case you’re struggling with the whole space thing, it might help to look at our post on how emotionally unavailable men still miss their partners.

Got any questions or would like to share your experience with men needing space? Let me know in the comments and I’ll get back to you.