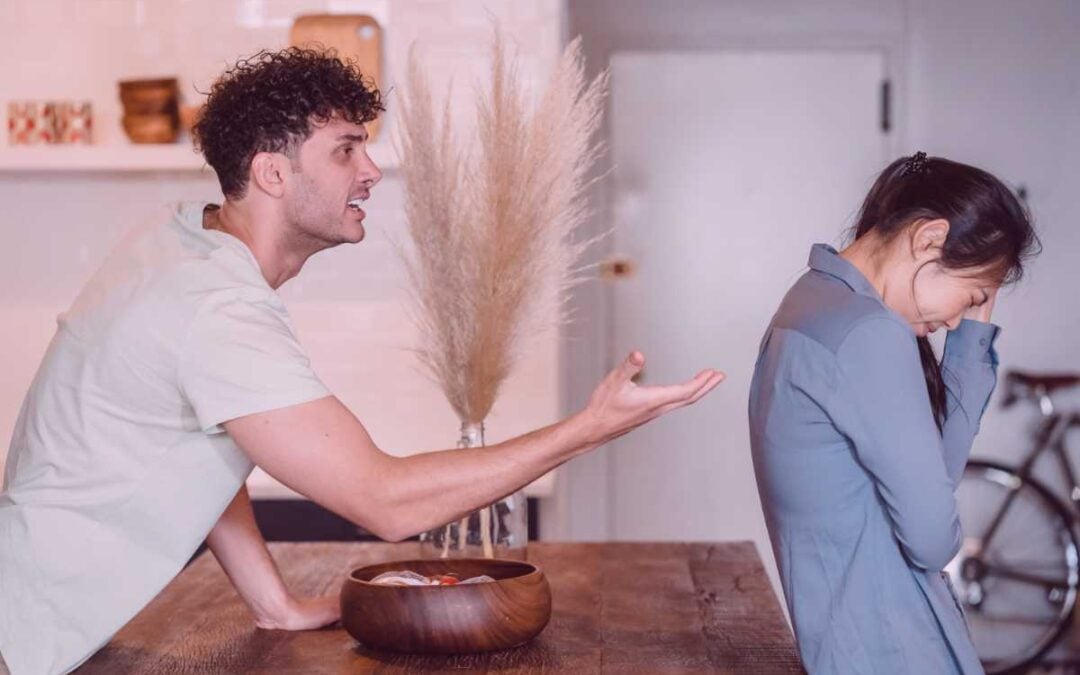 Heated exchanges can happen in a marriage.

And that is pushing it TOO FAR.

This post will give you acknowledgement and direction on what you can do to make your husband stop saying these distressing things.

First, let’s talk about his behavior and the…

14 Things a Husband Should Never Say to His Wife

Regardless of what might have transpired, these words ought to never cross a husband’s lips.

‘Why do you always overreact!’

One of the worst things a husband should not say to his spouse is the generalized statement of “You’re overreacting!”

Because when he says this, it’s not just hurtful.

It also proves that he doesn’t understand his wife’s unmet needs and pain that she is trying to simply communicate.

And him saying this, only increases her isolation and sometimes is even how husbands ultimately destroy their marriage.

Variations of this hurtful statement include:

It’s understandable that tensions can rise between spouses and in the heat of the moment he might scream ‘Shut up!’

But it is also one of the most crushing things a husband can say to his wife.

What are the worst signs of disrespect in a marriage?

Well, this is a definite one.

And it shouldn’t be taken lightly. Be sure to immediately set some boundaries with him.

This way, he can adjust to a more civil tone when he’s speaking to his wife.

Which is the very least a husband ought to do.

‘I don’t love you anymore’

One of the most cruel things a husband can say.

Because it suggests he’s been feeling this way for a long time and has gradually fallen out of love with you.

And he’s suddenly telling you now.

Instead, your husband should have tried communicating what wasn’t working for him in your marriage and made efforts to fix it long beforehand!

When a husband equates his wife to her mother, that’s an insult below the belt.

First off, he’s definitely not referring to the qualities of your mother.

But rather the worst things, you as her daughter appreciate least about your mother, and I’m sure have tried hard to outgrow and overcome.

So not only is your husband telling you that you have her negative character traits, but also that despite your best efforts, you’ll never be a strong independent individual.

He’s trying to reduce you to ‘Just like your mother.’

‘My ex was better’

You know what’s even WORSE than your husband comparing you to your mother?

That’s right. Comparing you to his ex.

Your husband will likely talk about how much better she could do/say this, that and the other.

Some husbands just really know what to say to destroy a marriage.

‘I’m not attracted to you anymore’

If your husband has said this to you, then he’s definitely aiming to hurt you.

Although chemistry in a marriage can fizzle out, it’s not okay for him to say things so bluntly and (likely) out of nowhere.

But both husband and wife need to work through the worst to rekindle the flame, and can’t simply write their spouse off by saying upsetting things like this.
<h3‘She’s hot, isn’t she?’

As though it wasn’t hurtful ENOUGH to dismiss his wife as unattractive, a disrespectful husband will make it worse by telling his wife that he finds OTHER women attractive!

This is another horrible thing for him to say to you and is definitely out of line.

A husband liberally acting this way is also a potential red flag and can suggest that he’s keeping secrets and lying to you.

‘I never really loved you anyway’

Well, in that case, he never really deserved you anyway.

What kind of inconsiderate husband has the nerve to say that he never loved his wife.

What’s worse, it suggests he’s been lying and pretending all along and that he’s just been there to use you.

The very same person that once confessed his love for his wife and CHOSE to become her husband is now saying that he hates her.

It’s just terribly hurtful and a definite sign of a toxic marriage.

Statements like these should not be allowed to go unchecked.

If a husband resorts to saying things like this, he’s truly insecure.

So try not to take it personally, it’s just him trying to establish dominance because he’s terrified of losing control.

This kind of behavior is commonly seen in husbands that are emotionally unavailable and do everything in their power to keep up a strong facade.

Don’t fall for it.

‘You trapped me in this marriage with a baby’

This is one of the worst things a husband can say to his wife.

Because he’s suggesting that you conspired against him and forced him to have a child with you that he didn’t want.

Creating a life together is a very intimate and special thing.

For him to dismiss your child as nothing but a trap is just another sign of a disrespectful husband.

‘I don’t want you sexually’

When a husband dismisses his wife sexually, he might be trying to undermine her sense of worth as a partner.

He’s also positioning himself as the one who gets to choose whether he wants you or not.

Which only worsens an already unhealthy power imbalance in your marriage.

But know, that when your husband says he doesn’t want you sexually, there are definite ways to regain power and control in the bedroom.

This statement can apply to so many individual moments in your marriage.

But it hurts the most when your husband means that he DOESN’T CARE AT ALL anymore.

This is what a selfish husband will say when he’s given up on life and won’t even lift a finger to try to fix a marriage, even though it could be mended if he tried!

‘I want a separation’

This is of course one of the worst things a husband can say to his wife.

The idea alone of ending a marriage can be frightening.

When he’s given up on you and your relationship, it’s often devastating and comes as a shock.

It’s of course an extremely unfortunate conclusion some husbands choose, that damages them more than they realize…

Some of you have asked other questions about the worst things a husband can say to his wife.

So I’ve compiled and answered them here.

What are the top 5 things that ruin a marriage?

You’ve heard this one before, and you’ll likely hear it again. Communication is an important foundation to make a relationship work. Movies and books often teach us that if you find ‘Mr. Right’ … Everything will magically fall into place. The reality is, marriages take work (We learned it the hard way!).

Whether it’s gambling, substance use or any other mental health problem a spouse has. Some unhealthy habits can worsen and spiral out of control. It might start to feel like the relationship revolves around managing the condition. If left unaddressed, it can ruin a marriage.

Cheating is a frequent reason why marriages fail. Spouses often keep secrets from each other, often with the justification that they ‘Don’t want to hurt’ the other. But sooner than later, the secrets come tumbling out and it’s challenging to fix things afterwards.

Money can be a delicate topic for couples. And that’s no surprise, since money impacts many parts of our lives. Not seeing eye-to-eye on these matters can put a big wedge in between you and your spouse.

If a marriage is dominated by psychological and verbal abuse from a husband, and he always has to ‘be right’ and control every aspect of his wife’s behavior, then it’s a recipe for disaster and will eventually ruin their marriage. So, if you find yourself in an abusive relationship. It’s important to evaluate whether it can become healthy or not.

What’s the number one cause for divorce?

The biggest contributors to divorce that are reported are a lack of commitment, cheating and arguments. The final reason marriages often end are related to infidelity, domestic violence and substance use.

What are the signs that your partner doesn’t love you anymore?

When your husband no longer makes an effort of any kind, is quick to dismiss and reject your every effort and gets angry quickly… Then chances are your partner doesn’t love you anymore. If he’s also distant and unavailable, his stance on your marriage has unfortunately definitely changed for the worse, and it will need a lot of work and time to revive.

How do you deal when your husband hurts your feelings?

It’s not easy when your husband says the worst possible things to hurt you.

When it’s been a long time of him repeatedly disrespecting you, sometimes you might even feel like you’re losing interest and want to give up.

But the fact of the matter is, marriages can be fixed!

Even when your husband is stepping out of line and saying things he shouldn’t.

The first and most important step for you is to set proper boundaries with him!

This means that when something feels too much to you, or you’re at your limit, you tell him that’s enough, no further.

Because without a boundary, he will keep overrunning you and saying the worst things.

So he needs to learn that it is NOT OKAY to say these hurtful things first.

Practice setting boundaries with him and start slowly with simpler things.

From there you can work your way towards the more difficult behaviors of his.

And alongside you getting better with the boundaries, you can start rebuilding trust and connection with him in a way that feels safe and true to both of you.

If you’d like some help with setting boundaries and reconnecting with your husband, we can support you with this in a one-on-one Coaching Call.

Here, we will listen to fully understand the situation of your marriage (in all its history and complexity) and then create a tailored strategy for you to stop his hurtful behavior.

Finally, we’ll show you how to finally make him treat you with the respect and appreciation you deserve.

Thank you for reading and if you have any questions please leave them in the comments section, and I’ll get back to you.