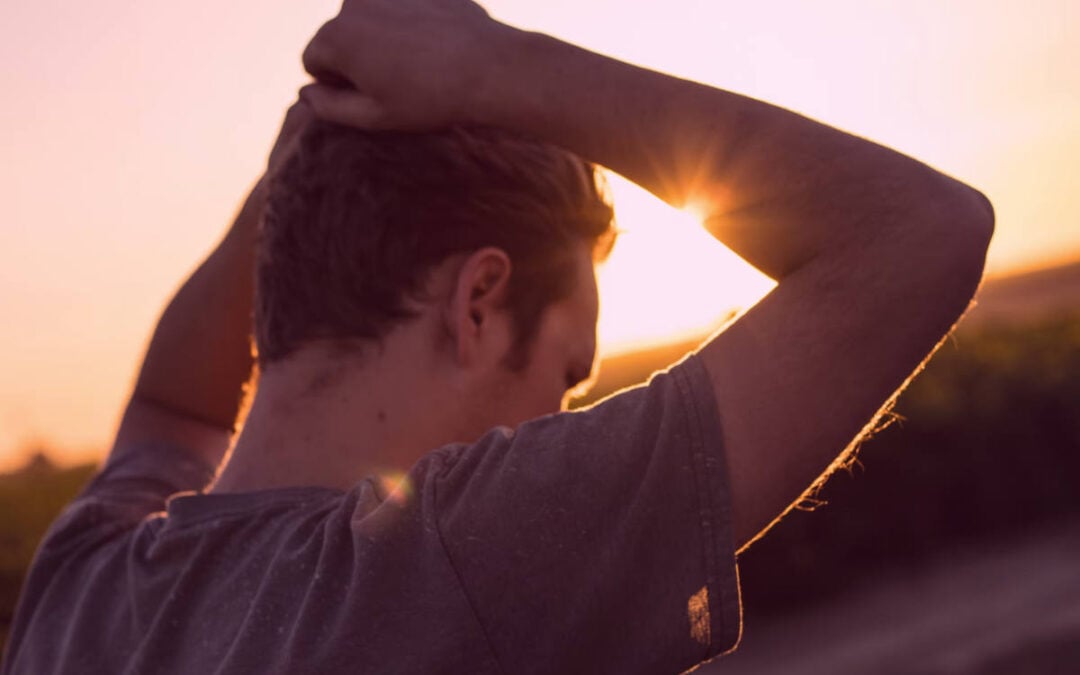 How can you tell if a guy is hurting after a breakup?

Men can act in the weirdest of ways when they are hurt. Plus, they are often also not the best at showing and communicating their true feelings.

From countless stories women shared with me in emails, comments and coaching calls, I know how confusing guys can be after a breakup.

On one hand, he might make you feel like his mind is all made up and this is what he truly wants.

But at the same time, some of the things he says and does just don’t add up!

I’ve experienced this myself first hand too, when my then ex and now husband (yes, we got back together) started blaming me for not wanting to see him a day after he broke up with me.

Guys’ behaviors after a breakup often don’t make any sense at all. It’s because they themselves DON’T know what they’re doing.

This is why you need to keep a cool head and read between the lines.

In this article, I’ll help you identify the signs that your ex-boyfriend is hurting after the breakup and what it means for your relationship.

1. He Doesn’t Reach Out to You

One of the most common signs a guy is hurting after a breakup is when he doesn’t reach out to you at all.

He doesn’t write you messages, doesn’t call, maybe he doesn’t even react to your posts or stories.

But he hasn’t unfriended or blocked you.

Don’t be fooled into thinking it’s a sign he doesn’t care after the breakup and is moving on already.

If you guys broke up only a few days or weeks ago, he can’t possibly be over you just yet.

Feelings for someone can’t just vanish from one day onto the next.

Your ex not reaching out is much more likely a sign that he is hurting because of something you said or did and is now giving you the silent treatment.

(This can also be true even if he doesn’t reply to your messages because keep in mind that no response is in fact a response.)

2. He Is Reserved and Distant

Another typical way in which guys try to communicate that they are hurting after a breakup by acting extra distant and reserved.

Make no mistake, guys do generally go cold after a breakup. It’s completely normal if things cool off between the two of you to some degree. After all, you’re no longer together.

But there is a difference between having some healthy amount of space and independence, and someone acting super cold and reserved towards you.

Maybe he believes you really hurt him. Maybe he doesn’t trust you anymore and is trying to protect himself from falling for you again.

Regardless of what his reasons for treating you this way are, him staying extremely distant and reserved is a sign he is hurting after the breakup.

3. He Acts as Though He Doesn’t Care About the Breakup

This is another one of these classic confusing male behaviors:

Has your ex made it out as though the breakup didn’t affect him at all?

That he is at peace with everything, is enjoying his single life and wants you to find happiness too.

He might be even encouraging you to move on and start dating someone else!

Why do guys so often act like they don’t care after a breakup?

It’s because they are so afraid of you abandoning them, that they’ll try to preempt the strike and make it out as though it was their choice.

In other words, “him giving you his blessing” is an attempt to maintain control over you and your dating life.

If your ex has been acting this way, it’s a definite sign he is missing you already and hurting after the breakup.

What’s more, he is pretending to be over you to provoke you to keep on chasing him.

4. He is Posting Sad Things on Social Media

This is a rather straightforward one, yet many women find even this one confusing.

If your ex has been posting sunset photos, lonely landscapes, sad quotes, songs about heartbreak and disappointment, etc. make no mistake, they are meant for you to see.

He is trying to communicate things to you indirectly.

Not only is this a sign he is heartbroken over you, but also that he is missing you and thinking of you.

He might even be pining over you and secretly wanting you back.

What makes this one confusing is that it will make you think:

“If he is so sad about the breakup, why doesn’t he just get back together with me already?!”

The thing is, this kind of indirect communication often happens when your ex broke up with you due to his fears and commitment issues, or if he was manipulated into doing it by somebody else.

He is hurting after the breakup, but likely still believes it was justified or inevitable.

5. He Is Irritable or Defensive Every Time You Talk

Your ex reacting defensively to everything you say and do is another obvious sign that he is hurting after the breakup.

Yet many women find this one hard to read too.

After all, him being so hostile and difficult might make you feel like he just doesn’t care about you at all anymore.

It’s true, he probably doesn’t have much room for where you’re at the moment, but that’s because he is just too hurt and heartbroken.

What’s more, he is endlessly provoking you to get you to come his way and show him that you care about him.

He is definitely still hurting after the breakup. Think about it, if your ex was truly done with you, he would make an effort to be more distant and civil.

6. He Throws Himself Into a Rebound Relationship Right Away

How do men fix a broken heart?

One of the easiest and fastest ways of relieving the pain of rejection and heartbreak is by finding someone else who can fill that void.

What better way to feel loved and appreciated than to start with a fresh slate. It can be like a band-aid for his broken heart.

If your ex moved on and got together with someone new almost right after your breakup, it’s a definite sign that he is still hurting and very desperate.

He is so afraid of being lonely and unloved, he can’t handle being single.

If you’re in this very situation, you might be wondering: how can you know if your ex is happy without you? And how do you know he is not coming back?

He is likely still hurting about the things he was needing from you, you couldn’t give him. So no, he probably isn’t happy, even if he is making it out as though he is.

Whether he is coming back or not, depends on whether you leave room for him to do so, and also on how viable of a relationship his rebound actually is.

How Do You Know if He Still Loves You After a Break-Up?

Now that you know if your ex is hurting after the breakup or not, the next big question you might have is whether his feelings for you are still there…

Let me put you at ease, right away:

Yes, he most likely still loves you!

People can’t help but get attached to the person they are with. Moreover, we don’t have control over our own feelings.

The only things that can eventually make the two of you drift apart completely are: distance and time.

Most women I talk to in coaching calls are always shocked by how long it actually takes for a guy to heal after a breakup.

The rule of thumb here is: your ex will need approximately the same amount of time he spent with you, to fully get over you.

So if you guys have been together for six months, you can expect him to need six months to let go of you.

And if your relationship lasted five years, he will need about five years to really recover from the breakup.

Our attachments run very deep (deeper than most of us are willing to admit). This is why it takes this long for a man to get over a broken heart.

What’s more, throughout all this transition period, his feelings for you will remain there (at least to some degree).

He might even continue testing you to check if anything changed, and if you still care about him too.

How Long Does It Take a Guy to Realize He Misses You After a Breakup?

It’s all well and good to realize that he is hurting after the breakup, and that he most likely still loves you.

But, if this is all the case, why did he even do this? Isn’t he heartbroken too? How do guys feel after they break up with someone?

Even though men generally start hurting almost right away after the breakup, the full impact of it doesn’t really hit the male dumper quite as much as it did you.

He is most likely sad and missing you, but he doesn’t feel nearly as hurt and abandoned as you might feel right now.

This is mostly, because he is the one pulling the strings and believes he could get you back anytime, if he changed his mind.

Getting a guy to realize what he just lost is actually trickier than we’re led to believe.

They can be very stubborn and set in their ways. This is why chasing them too much only drives them further away.

At the same time, men are insecure and don’t like losing control over their partner. This is why suddenly rejecting him or blocking him can also seriously backfire.

If you need more help navigating this confusing situation, we can help you get through this with ex back coaching.

I’ll listen to your story and help you make sense of it. This way, you’ll know if you’re just imagining things, or if he truly isn’t over you just yet.

Together we will then come up with a plan on what to say and do, to get him to come back to you as soon as possible.

In case you could do with more tips on what to do to get a guy to realize he misses you after the breakup, check out my other post:

Cut Him Off, He Will Miss You, or Will He Just Move On?

Thank you for reading, and if you have any comments or questions, leave them down below, and I’ll get back to you!