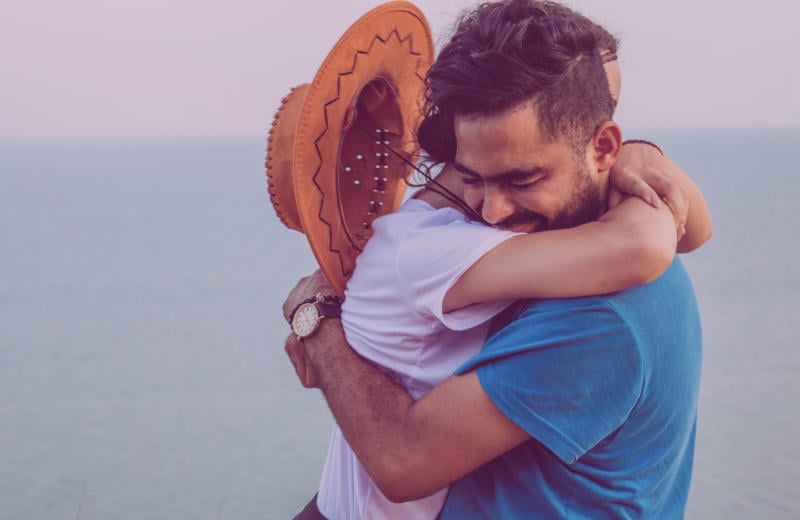 Breakups almost never feel like a definite end of a relationship.

When you’re together with someone, you inevitably become attached and develop a connection and that’s something that can’t just vanish from one moment onto the next.

If your boyfriend recently broke up with you, or you were the one to break up but regret it, know that this feeling you likely have: that things are not over yet, is right!

It takes months if not years to truly let go and move on. And through all that time a window of opportunity for reconciliation and fixing things often remains open.

My boyfriend and co-author of this blog broke up with me three times in the first years of our relationship. After every one of these breakups we ended up getting back together in about a month. And I know from all of you guys just how common these kinds of situations are!

Couples break up but things don’t end there. They keep on texting, seeing each other and either things fizzle out slowly or they end up getting back together.

Of course, to make a relationship work after a breakup, both sides need to want it and this is not always the case.

That’s why I’ve compiled a list of signs to help you know if your ex secretly wants you back and is waiting for you to make the next move.

1. He Left His Things at Your Place and Isn’t in a Hurry to Pick Them Up

When a guy breaks up, women generally expect that he really means it. That’s why they are then often baffled when he then leaves many of his things at their place for weeks or even months after the breakup.

Sometimes this can even include really important personal items like documents, spare keys etc. But it can also be smaller, less important stuff like clothes or electric toothbrushes…

So if you still have your ex’s stuff lying around at your place know it’s not because he just forgot about it.

He is leaving it there on purpose because it gives him a sense of ‘emotional security’ to have things still connecting you two, as though you were still together in some way.

It’s a definite sign that he isn’t over you yet and is waiting for you to see where you really stand and what you’ll do.

2. He Still Has Your Things at His Place and Isn’t Trying to Give Them Back

Much like in the case of him leaving his stuff at your place, him keeping your things isn’t accidental.

It’s not that he just forgot about them or just doesn’t care to arrange to give them all back.

To him, keeping your stuff is even more of a ‘security’! Not only does it give him the feeling of having a connection with you, but it’s also a guarantee that he’ll get to see you at least once again.

Him holding onto your stuff is a sure sign that he is waiting for you and secretly wants you back but wont straight up admit it!

3. He Keeps on Texting or Calling You as Though You Were Still Together

This is another classic behaviour so many of you have told me about: a guy breaks up with you but then continues acting as though you were still together.

This might mean regular texting and phone calls or even arranging to see you or go on dates with you.

This was actually the case with Gabriel and me too! The third time he broke up with me on a Sunday and then on Monday afternoon I received a text from him saying: “Wanna meet up for a coffee?”

Men can be extremely confusing! Their reasons for pulling away often make next to no sense.

If your ex continues to reach out to you regularly after breaking up with you, know this is a sign he clearly misses you a lot.

Chances are, he is testing you to see if you’ll give up on him or not and waiting for you to make him come back.

4. He Replies Right Away

The speed at which someone replies to your text can actually give you a lot of insight into where they are really at and whether they are interested in talking to you or not.

When a guy takes hours to reply or worse yet, keeps on leaving you on read, be careful, it’s an indicator that he is either not serious or no longer into you.

But when you text your ex and he replies within the same minute, it’s a sure sign your ex has been thinking of you, missing you and waiting for you to reach out to him.

Also he is clearly really eager to keep the conversation going.

5. He Keeps You Updated on What’s New in His Life

Being together with someone means having a person to share all the important moments in life with. All the small and big victories as well as defeats.

Most people who break up don’t actually understand the consequences of it when they are doing it.

They’re blind to abandonment and rejection they themselves are inflicting and then act accordingly.

So, if your ex keeps on updating you on everything that’s happening in his life, even though he might be the dumper, in these moments he wants you back.

It’s a sign he still needs you and because of it is likely waiting for you to make a move and get him back.

6. He Isn’t Dating Anyone New

His reasons for wanting to break up back then was because he wasn’t ready to settle down and wanted to experience love and life.

I was obviously heartbroken but accepted where he was at and went on a two week sailing holiday.

But to my surprise, he did not see anyone while I was away, he said he was taking a break from dating for the time being.

If a guy broke up with you supposedly because he fell out of love or didn’t care about you as much as you cared about him but he isn’t trying to move on and date anybody new, it’s a sign that he is likely still hung up on you.

He is likely battling some attachment/commitment issues and is waiting for you to help him break out of them.

7. He Texts or Calls Late at Night

People often judge drunk calls or booty calls but the thing is, alcohol lowers our inhibitions. When we’re drunk we often go after things we want but wouldn’t have the courage to try when we’re sober.

If your ex drunk texts you or gives you a booty call, know it’s a sign he is missing you at that very moment.

It’s an indicator that at least part of him is still waiting for you and secretly wanting you back.

8. He Tells You He Misses You

Have you ever had your ex say to you: “I miss you” and felt like he can’t possibly mean it, because if he did he wouldn’t have broken up with you in the first place?

The thing about breakups is that they never really are straightforward.

More often than not, the dumper is only doing it as a last resort to communicate that something really isn’t working for him in the relationship.

They’re not actually wanting to break up.

They want you to get them and possibly stop doing something that’s really hurting them.

Unfortunately, his rejection hurts A LOT too.

So much so, that when an ex who dumped you says that he misses you, you might just discard it as though it meant nothing.

However, him saying something like this to you is pretty much straightforward admitting that: he is waiting for you and wanting to fix things so that you two can get back together.

9. He Talks to Others About You

Couples who have been together for many years can sometimes have trouble communicating without fighting. When a relationship reaches this stage, breaking-up often seems like the only option to escape the cycle of endless hurtful fights.

However, it doesn’t help with resolving anything.

People are desperate to find solutions to things that hurt them and can find creative ways of doing so. Some of our coaching clients have utilised this hack: communicating through friends.

Even though it’s not the most effective way of communication, it’s better than nothing.

So if your mutual friends have been telling you that your ex has been talking or complaining to them about you, know that this isn’t accidental. He meant for you to get this message!

Chances are this is the only way he can currently try to reach out to you. He might be so hurt and bitter that he simply can’t do it directly.

Even though this might be infuriating (because he seemingly could just tell you these things himself) it’s a sign that he is thinking about you and waiting for you to do something to fix things.

How to Get Him to Openly Want You Back

It’s all well and good to read the signs that he is waiting for you and to know that he secretly wants you back but that’s just the first part of getting out of this tricky situation.

Reversing a breakup can take anything from one simple text in some cases to weeks or even months of long conversations and rebuilding trust.

Ultimately the goal here is to get him to openly want to be with you again and also to prevent any further breakups from happening.

Every situation is different, and so are couples paths to reconciliation.

If you’re looking for personalised advice on how to approach your ex to break through his barriers and let you in, we can help you out with ex back coaching.

Here we listen, empathize and help you make sense of your situation. We will also give you tips on exactly what to say and do to fix things and get him to want to commit to you again.

In case you’re curious and want to know more of our story and how we got back together, be sure to read: How I Got Him Back - 4 Ways to Make Your Ex Want You Again