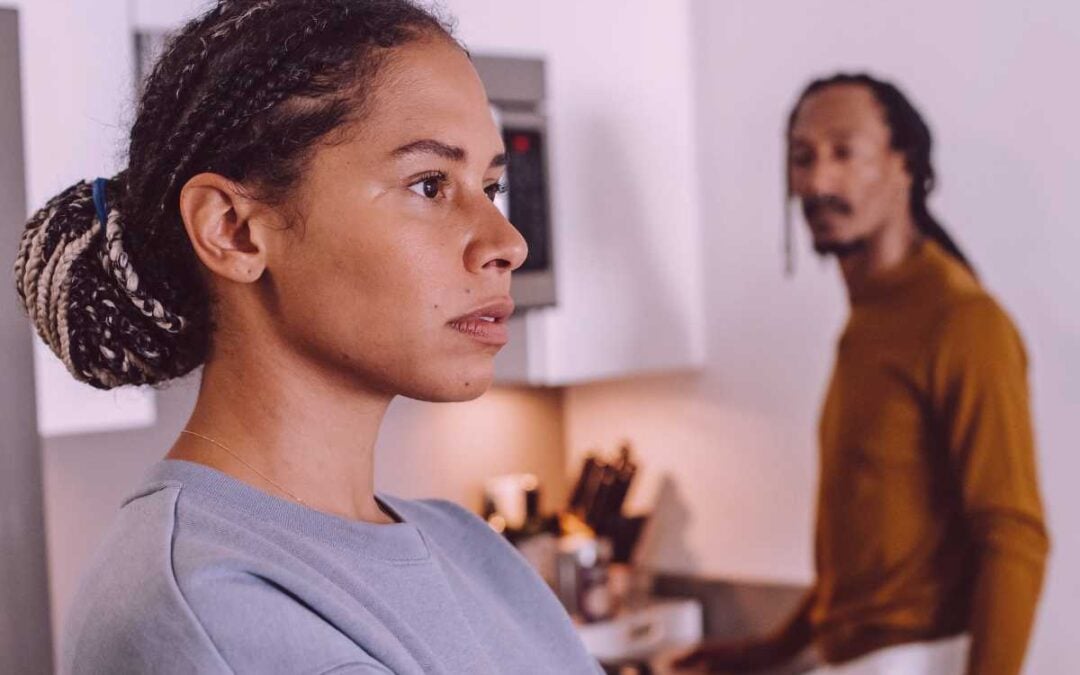 When your husband or boyfriend becomes quiet all of a sudden, it can be very unsettling. Having a man distance himself this way, often sends women into a bit of a spiral of self-doubt and panic.

What makes this situation worse is when you confront men about their silence, then often only brush it off as nothing and continue brooding…

First off, you’re right to be worrying about this!

Something is up with him. What’s more, this kind of silence is frequently a precursor to a breakup or even divorce.

Men can act in the strangest of ways, and they sabotage relationships too!

Going quiet or resorting to silent treatment is one of the most common ways of how they do it.

In this blog post, I will explain this male behavior and outline the five biggest reasons why and when men go silent. They’ll help you understand how to approach your boyfriend or husband in a way that will get him to talk.

1. Men Go Quiet When They Are Stressed or Overwhelmed

The by far most common reason why men go silent in relationships is: because they are stressed or overwhelmed by their job or school. This kind of silence can also be related to family emergencies, injuries, or other external problems.

Some people process their issues by rambling about them, while others go quiet and try to recover on their own.

This is particularly common if your boyfriend or husband is an introvert. Rather than talk to you about what’s going on for him, his first reaction to stress is going to be going silent and trying to lose himself in gaming, binge-watching series etc.

When this happens, women often panic and become more anxious or even needy. This in turn only makes their husbands or boyfriends even more stressed or overwhelmed, so much so, they might ask for a relationship break because of it.

2. Guys Go Silent When They’re Struggling With a Big Issue

This reason is a slightly more serious variation of the previous one. All of us go through some major changes in life and can start doubting our relationships as a result of it.

Quite a few coaching clients of ours come to us with this problem. Their partners became silent for no apparent reason, only to then find out that they were actually questioning all their life choices, were in a life crisis, were unsure of their sexuality or suddenly became unsure about wanting commitment.

The reason for your partner’s silence in this case could be that this particular issue seems so vulnerable or insurmountable, they don’t even dare start talking about it.

Or they themselves might not even be aware of what’s truly going on.

When this is the case, it might take some digging before you can find out why exactly your boyfriend or husband went silent all of a sudden.

Keep in mind, this kind of reaction could also be a sign that you’re loving someone with avoidant attachment.

3. Men Can Give You Silent Treatment When They’re Hurt

This is the first out of the five reasons why men go silent that actually is directly related to you and your relationship.

Silent treatment is definitely not the healthiest of responses to feeling hurt, nevertheless, it’s extremely common.

Both men and women do it, especially in the context of romantic relationships.

Admitting that something you said or did hurt him might feel too risky or too vulnerable. It’s much easier for a man to just hold a silent grudge and hope that you get the hint.

Especially if he believes it’s all your fault and thinks that he does nothing wrong.

This reason often goes hand in hand with any of the previous ones. Sometimes men try to communicate things, but they end up feeling like their attempts fall on deaf ears.

This might happen when you react defensively or ignore what he says. Or when what he is saying is just too vague, or when he just shuts down way too easily.

Either way, when your boyfriend or husband tries to tell you something, but it doesn’t land the way he wanted, he might end up feeling dismissed.

He might then be too discouraged to try again and will go quite simply because he feels like he is out of options.

This kind of reaction is particularly common for shy or emotionally unavailable men. It’s one of the reasons why it’s so hard to get them to open up.

5. Men Get Quiet in Relationships When They Don’t Know How to Communicate Their Needs

Last but not least, another common reason why men become quiet in relationships is because they have never learned how to communicate.

Talking about feelings and emotions is often a taboo, even more so for guys than it is for women. You might feel like your boyfriend or husband is becoming distant or giving you silent treatment, when in reality he is simply struggling with talking about where he is at and what’s going on.

Bunkering in and brooding is the only way he knows how to process his emotions.

So he is not shutting you out on purpose but simply because to him, that’s all there is.

He is used to being alone with his problems and accepts it as an inevitability.

In these situations, when a man goes silent, it is his loudest cry. It’s the only way he can communicate to you that something is up and that he needs your help.

Should You Give Him Space When He Goes Quiet

I know that for a lot of you guys, your first reaction to a man going silent in a relationship is to give him space. You hope that distancing yourself from him will be enough to get things to return to normal.

This can be a good approach when the reasons for his silence are not too severe or constant.

For example, if your boyfriend and husband is stressed with a work project and goes quiet because of it, you can just wait it out. Once the worst blows over, or the project ends, he will return to normal on his own.

Things become more difficult if the source of his silence is a long term problem.

Like a job that’s just constantly stressing him out, family issues that are not going away or a life crisis, a personality crisis, etc.

When your boyfriend or husband is struggling with something more severe, giving him space might only lead to him becoming even more quiet and distant.

How to Get a Silent Man to Talk

The key to getting a brooding man to talk is to make the conversation about him and not about yourself. Telling him how YOU feel and what YOU need will most likely only make him shut down further.

Making room for where HE is at and what HE needs, on the other hand, will get him talking to you in no time.

This is how you can support him in whatever he is going through and get him to open up to you again. It’s also how you can speed up his recovery so that your relationship can return to normal sooner.

If you’re looking for more step-by-step guide on how to make this happen, it’s something we cover in detail in our online course: Rebuild Your Relationship

Here, we will give you phrases you can use to help your boyfriend and husband feel heard and understood. It’s the only way to get past his silence and get him to finally be more open and trusting again.

And if you’re looking for more tips on this topic, be sure to check out my other post: How to Communicate With a Man Who Won’t Communicate

Thank you for reading!

If you have any questions or comments, please leave them down below, and I’ll get back to you.