Defensive Listening in Relationships | How to Deal With It 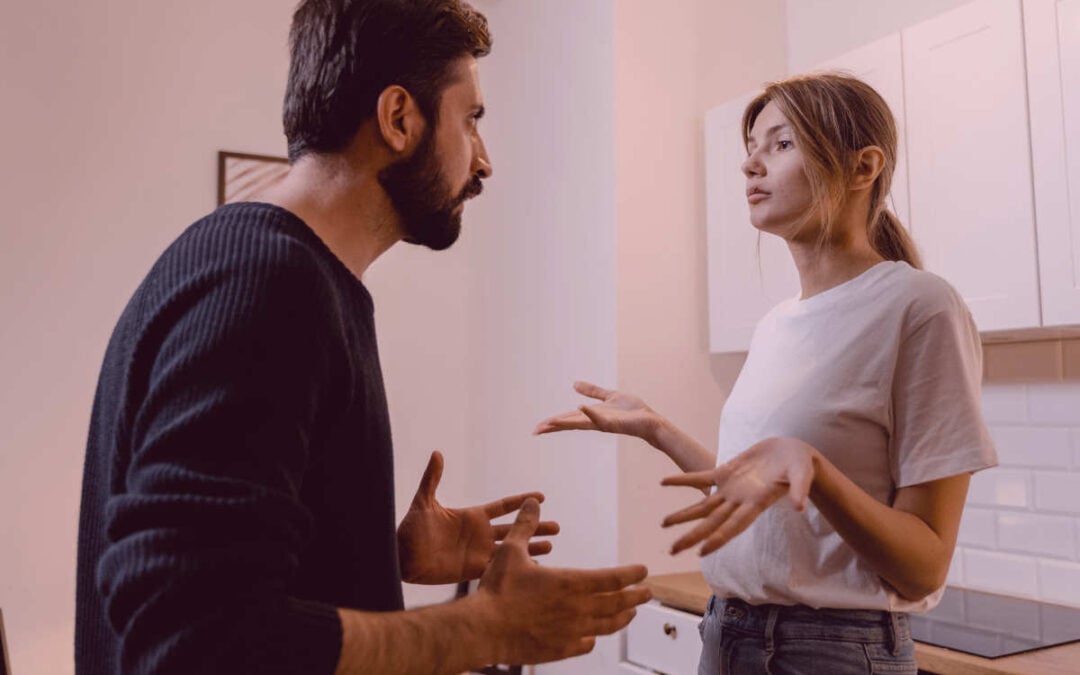 Have you ever tried telling your partner something only to have them shoot you down or worse yet, turn the conversation into a fight?

If this happens to you, it’s very likely that your partner struggles with defensive listening. It’s a way of miscommunicating that causes a lot of problems in relationships.

To be honest, every single couple has to deal with this issue to a greater or lesser degree.

Everybody gets defensive sometimes!

However, there are varying intensities when it comes to defensive listening.

If you’ve been feeling silenced and discarded by your partner lately, chances are he or she is struggling with defensive listening to a degree that is harmful for your relationship.

Don’t worry though, there is a lot you can do about this!

In this blog post I will help you understand what defensive listening is exactly, why it happens and what to do to get your significant other to actually hear you out.

Fully understanding what defensive listening really is will help you notice it when it happens and will enable you to deal with it in a healthy way.

Some concepts are best explained with examples though. That’s why before giving you any definitions I will first outline a few examples of defensive listening in a conversation:

Julie, trying to communicate: “Uhh work was so stressful today”

Shaun, defensive listener: “You always complain about everything.”

Brad trying to communicate: “I really wish you were more affectionate towards me”

Anna, defensive listener: “I am affectionate towards you. You’re just too needy.”

Chloe, trying to communicate: “I can see that you’re upset about something. What’s up?”

As illustrated by the examples above:

Defensive listening is your partner responding to something you said by either discarding it, or by attacking you because of it.

Like I mentioned before, every couple struggles with this issue to some degree. But if it happens very often in your relationship, it can lead to an unhealthy amount of fighting.

There are two main reasons why your partner might be struggling with defensive listening.

The first one being that they hold a grudge related to the very thing that you’re trying to communicate.

Consider a situation like in Example 1, with a bit of back story:

Julie, trying to communicate: “Uhh work was so stressful today”

Shaun, defensive listener: “You always complain about everything.”

Imagine that Shaun (defensive listener) has been working really hard and carrying more of the financial responsibility in that relationship. He feels really stressed because of this and has been holding a grudge towards Julie (and people in general) for many months.

Julie complaining about work only reminds Shaun how angry he actually feels about it all.

But rather than explain and communicate his anger, he just lashes out.

Shaun, defensive listener, in this case is holding a grudge related to the very thing Julie is trying to communicate:

Shaun is holding a grudge about his stress at work being unacknowledged!

Now, the second big cause for defensive listening is having experienced being discarded and rejected like this many times in the past.

Let’s take Example 2 to illustrate this:

Brad, trying to communicate: “I really wish you were more affectionate towards me”

Anna, defensive listener: “I am affectionate towards you. You’re just too needy.”

But imagine that Anna (the defensive listener) from this example received very little affection from her parents growing up. Whenever she came in for a hug she was told to “Stop making such a fuss.”

Because of this she now gives Brad the same attitude she received in her childhood.

So, whenever you experience defensive listening in your relationship you can assume that it’s due to the combination of these two mentioned reasons.

So defensive listening is caused by:

How Do You Deal With a Defensive Listener?

Now that you know how to recognize defensive listening and understand why it happens, let’s finally jump to what you can do to deal with this problem in a healthy way.

The point of these tips is to provide you with tools to defuse the conversation and get your point across.

First and foremost, don’t let your partner just discard what you’re trying to tell them.

I know from my own experience this can be really difficult.

Like I said, every couple struggles with this. My husband who runs this blog with me and I also get defensive about things sometimes.

Prepare yourself, your partner will likely try to communicate that you’re being unreasonable, overreacting etc.

Don’t buy into their narrative. They’re just triggered and being defensive.

So stay on topic and don’t give up.

You deserve to get all the care and attention you want from your partner.

2. Set Boundaries to Make Them Realise There Is a Problem

When a defensive listener is discarding what you’re saying or deflecting and attacking you, most of the time they don’t realise that they’re hurting you.

In their head you are being unreasonable or blaming them. So to them their reaction is fully justified.

Also, it’s not uncommon for some women, as well as men, to be fully convinced that they do nothing wrong.

That’s where setting boundaries can come in handy. It can make it clear that you’re not ok with your partner’s way of responding.

It can also allow you to further protect yourself from them discarding you or your needs.

3. Talk About What Is Making Them So Defensive

I know this might be difficult to hear, but sometimes to get someone to hear you out, you have to listen to them first.

If you’ve tried repeating yourself a million times, you’ve set boundaries but you’re still not getting any further to getting your point across, then you listening is your only bet.

There is no point staying stuck not communicating and endlessly arguing all the time.

So ask yourself and your partner:

Why are they reacting this way? What exactly are they so defensive about?

Sometimes you need to make an effort to get their side of the story first.

Only once they feel heard and understood, can they drop their guard and finally give you the very thing you’ve been needing from them.

How to Manage Defensive Listening in Relationships

Defensive listening is a very common problem in relationships. It’s next to impossible to get rid of it entirely. There are always going to be things that either you or your partner feel attacked by.

Most couples tend to get stuck in patterns with each other though.

They keep on getting triggered and repeat the same argument over and over again.

Noticing when one of you starts listening defensively is actually a big step that can help you break these kinds of damaging cyclical fights.

It can allow you to defuse and put an end to an argument before it even escalates.

If you’re interested in learning more tools to help you manage defensive listening, that’s actually something we teach in our online course for women: Rebuild Your Relationship

Here we will give you step by step guides on how to set boundaries with your partner. This can help you get them to take you seriously and finally hear you out.

We also provide in depth tips on how to fight less and consequently enjoy your relationship more.

Dealing with relationship problems can be very tricky. But at the same time, even tiny progress can make a world of difference and make you and your significant other feel in love again.

If you want more help on how to deal with defensive men, check out my husband’s post: He Gets Defensive When I Tell Him How I Feel – How to Get Through

In case you have any questions about defensive listening, leave me a comment below and I’ll get back to you.