How Often Do Couples Fight in a Healthy Relationship 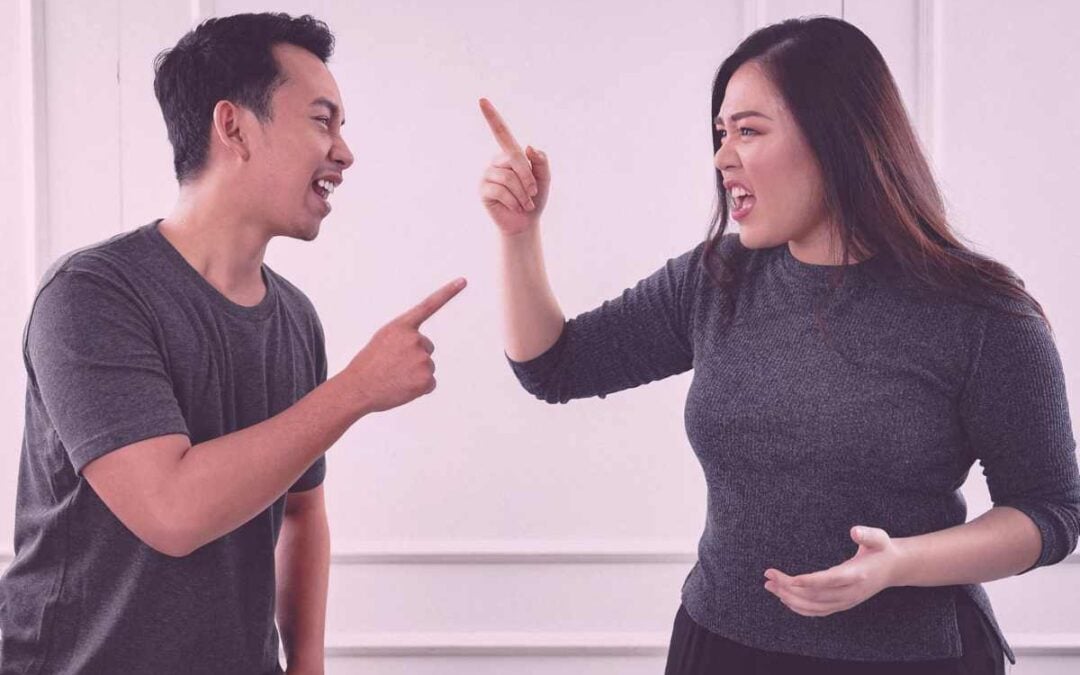 Since you’re asking, how often do couples fight, you’re likely in the same position we were once in:

You’re fighting too often, feel frustrated (maybe even given up), and want to know what a ‘normal amount’ of fighting in a relationship actually is.

If so, then you’re in the right place.

Karolina and I used to fight A LOT in our relationship. Like too much.

Honestly, it was absolutely exhausting.

We both felt so drained with the repeating arguments.

But more on that later.

Let’s first get to that burning question of yours, ‘How often do couples fight?’

To be clear, when we say “Fight” we mean an emotional, often heated argument.

So we’re not talking about small disagreements over who’s getting the milk today or briefly bickering over what series to watch.

I mean ACTUAL arguments that leave you feeling bitter, hurt or angry.

Now that that’s clarified, based on working with our clients and the thousands of emails and comments we get from you guys:

On average, couples fight 1 to 3 times per week.

Which means couples fight as often as 130 times in a year.

Since you’re likely here, because you want to fight LESS in your relationship.

So let’s figure out how to do that, and along the way we’ll answer the questions we’ve heard from all of you:

Is Fighting Necessary in a Relationship

The short answer is: Yes, fighting is often necessary for couples.

Because a relationship is two people that are doing their best to support, love and take care of each other’s needs…

AND we’re all pretty terrible at communicating & negotiating our needs.

So instead of having a courteous exchange and compromising where necessary, things tend to escalate into full-blown fights, fueled by misunderstanding, fear and buried trauma.

So fighting is the NEXT BEST THING we do, to try and have our needs met in a relationship…

Even if it sometimes raises concerns about whether it’s maybe a love-hate relationship.

Now, you might also be wondering if there are couples who never fight?

And yes, there are.

But the couples who never fight, are unfortunately also often the very ones who make the mistake of believing that not quarrelling means that everything is okay.

They later experience breakups that seemingly come out of nowhere!

Which is sad, because their relationship could have been fixed sooner.

But given that their true feelings were swept under the rug for TOO LONG, it turns out one (or both) partners were secretly terribly unhappy for years.

I can’t begin to tell you how many of our coaching calls have revolved around this very issue.

So a relationship without arguments is rarely healthy; not fighting does NOT necessarily equal a happy couple.

When a couple fights, they typically have better chances of staying together, because they’re at least trying to talk about their unmet needs.

Which means even happy couples can have phases of often fighting in their relationships.

Having said all of that, it doesn’t mean you can’t reduce the amount of fighting and HOW you fight in your relationship to make it more bearable!

What Is a Healthy Amount of Fighting in a Relationship

So if you’re in a situation that has you asking whether it’s normal to fight every day in a relationship, the answer is: No, fighting every day is not normal and definitely on the intense side.

But if you’re both working through some bigger issues or challenges, and you’re fighting every day for just one week, that’s understandable!

(Be sure to say these phrases to smoothen things out afterwards)

When Karolina and I made big life-changing decisions (Like transitioning from our old jobs to working on our blog full-time) we also had a more intense phase of fighting, which gradually died out as our lives stabilized again.

You have a few months of peaceful harmony, followed by a week or two of fighting more often.

And depending on how big the issue is that you’re working through, a relationship fight can last from an hour, to as long as a few days!

But the best way to know how often you should be fighting with your partner, is to think of it in terms of ratio instead of time.

(Because it’s not always the same, some months you’ll fight less and others more)

This means that it’s not about the hours or days you spend fighting, but how much of your overall time is spent fighting, vs. how often you’re enjoying each other’s company:

An average healthy amount of fighting in a relationship is anything up to 25% of your time together.

So that the remaining 75% is then about all the good stuff, like going on dates, connecting, having fun, even taking on life together with shared responsibilities!

If the amount of fighting is far above 25%, should you quit a relationship?

And the answer is not necessarily.

You don’t need to end a relationship if you’re fighting a lot.

Because issues can be worked out, and you can learn to talk to your partner in ways that don’t keep things calm.

If you’re concerned that your relationship might be truly toxic though, then you might want to read our post:  5 Things  That Need  to Change  for a Toxic  Relationship  to Get Better.

How Do I Stop Fighting With My Partner

So far we’ve talked about how arguing is often necessary in relationships because it’s how we try to express and have our needs met.

It’s not perfect, but it’s typically the best we can do at the time!

We’ve also covered how often you should be fighting in a range that is still considered healthy, which is no more than a ¼ of your time.

Now, in order to stop fighting with your partner (or dramatically reduce fighting), you need to have a new mindset about conflicts and learn some powerful relationship skills.

You’ve heard it often before, and I guarantee it won’t be the last time.

Because being able to communicate in a way that makes your partner listen is one of the best first steps you can take to reduce how often you have disagreements with them.

Many people just argue the way they saw their parents do it, and that remains the unquestioned standard throughout their lives.

But our parents didn’t have it all figured out.

There’s plenty of room to grow, even if it’s just a few minutes spent on learning easy 3 communication hacks.

Little efforts towards skills like these will already help couples reduce how frequently they fight.

2. Identify the Root Cause

When couples fight, they often get stuck in shallow arguments and never identify the root cause (The underlying problem that is actually creating the argument!)

It might often start with you feeling upset about something and you try to express it.

Your partner takes it personally and gets upset about what you expressed.

Which in turn upsets you, because you don’t feel understood and he’s gone and made it about himself again!

And on and on it goes…

Things gradually escalate until emotions are running so high, that you’re either screaming at each other or silently brooding.

And even though an hour or more might have passed, there’s still NO RESOLUTION!

Everybody is just frustrated, angry and hurt.

This is because the attention was on the surface problems. (and often trying to ‘win’ the fight or ‘be right’)

But if you can redirect your focus on identifying the root cause which is driving the argument, you can stop fighting much sooner and actually solve it!

For example, once when we were travelling, Karolina asked if she could take a nap while I drove. I said of course, but while she was asleep, I missed our exit on the highway, which caused a whopping 1-hour detour.

We fought about it and got nowhere, until we started focusing on identifying the root cause.

And it turned out that it was actually about Karolina feeling like she couldn’t relax and trust anyone but herself with responsibility.

She felt alone with it and was afraid that she always had to stay alert and couldn’t trust others.

Root cause: Her need for feeling safe was not met.

3. Address the Root Cause

Once this was clear, we could focus on and address her unmet need instead of endlessly blaming and arguing with each other.

We could finally SOLVE the fight.

Phew, what a relief!

So we had a long discussion about Karolina’s unmet need and found ways to help her feel more safe.

She was happy, I was happy and we could get back to enjoying our trip.

In conclusion, if you take this kind of approach, you won’t fight as often.

You’ll also save yourself the pain and won’t have to walk away from an argument feeling hurt or defeated.

Honestly, these arguments were such a pain for us, they actually lead to multiple breakups. But once we understood the underlying mechanism driving our fights, things started to work for us.

And because we saw so many couples struggling with the same patterns, it actually motivated us to create our Rebuild Your Relationship course.

Here, we show you the exact steps we took to stop fighting in our own relationship and teach the true-and-tried methods we both apply in our relationship to this day.

We break down why fights happen and how to get to the root cause fast. So that you can put a stop to your arguments and enjoy your time together instead.

Otherwise, there are plenty of other posts on our blog that you can browse to inform yourself about all sorts of relationship topics, including one you might find relevant: Your Boyfriend Fights With You on Every Small Issue? Here Is What to Do!

Got any questions that remain unanswered? Let me know in the comments section!