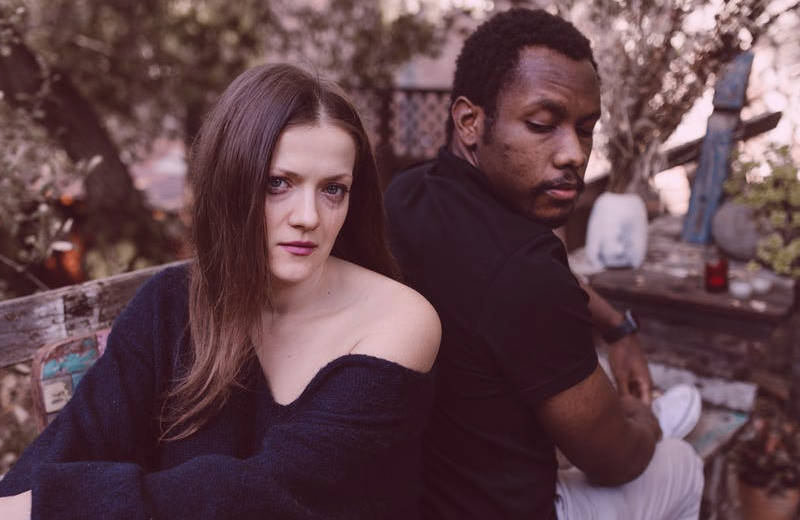 There’s something on your mind, and you want to tell him how you feel.

No, at this point, you NEED to tell him how you feel…

In the past you’ve gone above and beyond, tried everything and no matter what, it’s like you’re walking on eggshells…

The moment you open your mouth to say something.

He straight up ignores, denies or retaliates.

And once again, you’re left by yourself. With the feelings you wanted him to acknowledge, totally ignored.

Now, I hate to tell you this…

…But I was once that defensive guy.

My girlfriend Karolina, who runs this blog with me, would come to me about feelings of hers.

And I would immediately go on defense.

It often didn’t even matter what she tried, I would almost always take things as criticism, even if it wasn’t about me, or she didn’t mean it that way!

But over time she DID eventually get through to me.

We figured it out together and also noticed that it was actually a very common complaint from women in our friends circles, about their boyfriends or husbands.

So what’s behind all of this over-the-top defensiveness, and how do you disarm a defensive person?

In this post, I’m going to tell you how Karolina and I overcame this problem and how you can too.

What Is Defensiveness in a Relationship

Defensiveness in a relationship is when he puts his walls up and retaliates against you, without provocation.

The first part is putting up a barrier, also known as stonewalling, which in itself, is definitely considered a defensive behavior.

(Stonewalling is when he shuts down and doesn’t let you in emotionally.)

It’s also often followed by a guy saying he needs some space, shortly after.

The second part of defensive behavior is often retaliation, where he verbally attacks and justifies himself.

Now, there are of course degrees to this behavior…

When Karolina would want to talk to me about feelings that were weighing on her, for certain topics I wasn’t defensive.

Like her feeling frustrated about not doing enough new things. Or her being upset about our weekend plans being postponed.

Those things were totally fine to talk about for me.

But some other things, like her complaining about feeling alone, for some reason I could get really defensive.

Likewise, in your relationship, there will be areas with him that are more touchy than others.

Some of you asked…

“Why does my boyfriend get mad when I talk about my feelings?”

“Why does my husband get angry when I tell him how I feel?”

All men get defensive in the same ways.

And sometimes this even reaches a point, where you might not be able to talk without arguing.

But why do men take everything as criticism or an attack?

This was the same question Karolina put to me.“Why do you think I’m criticizing you? I’m just trying to tell you how I feel!”

To which I would respond…

“But you are attacking me! You are criticizing me! How am I supposed to not get mad about that!?”

So the real REASON why men get so defensive, when you tell them how you feel, is because they THINK you are attacking them!

In their minds, that’s what’s happening.

Even if you’re NOT.

That is why they react so strongly and defensively.

When somebody thinks they’re being attacked, they’ll try to defend themselves.

What Does It Mean When a Man Gets Defensive

We also need to talk about this point, because some of you might be wondering whether getting defensive is a sign of cheating.

The truth is, that it CAN be.

It makes sense, because when cheaters are confronted, they often act in a guarded way or can be oversensitive.

And if he simply won’t answer a direct question, and you really suspect him of being a cheater, maybe you want to know how to tell if he is lying to you or the warning signs he may be a player.

BUT there are other things that can cause defensive behavior, that are unrelated to cheating.

As mentioned, with Karolina and me, it was enough to only THINK that she was attacking, to make me very defensive.

And I’ve seen this pattern countless times with other couples.

Where the guy has nothing to hide, but is very quick to take things personally.

So it can also simply mean that your boyfriend or husband may not know any better way to react, then be defensive.

How Do You Communicate With a Defensive Partner

So now we’ve talked about defensiveness being when he puts his walls up and retaliates against you, without provocation.

We’ve uncovered that the reason he gets defensive is that he thinks you are attacking (blaming or faulting him, even when you’re not!)

… So how do you talk to someone who misinterprets everything you say?

The key to avoiding and stopping these kinds of overreactions, is to approach him the right way and say the right things.

Because I can tell you from my own experience, just how overly-sensitive I was about this stuff.

So when you approach him, try to keep these 3 things in mind:

1. Try Not to Be Defensive

Especially when he’s all fired up and accusing you of attacking him.

But if you also get defensive at this point, in his mind, it CONFIRMS that you were blaming him.

“Aha! You’re getting upset, because I’m seeing through your attack!”

You then tell him that’s not true, he insists that it is, and it can escalate into a full-blown fight.

So in moments where he reacts in a guarded way, try not to be defensive.

Because he’s locked in his narrative of you blaming and faulting him for something, and will look for any indication that this is true.

And if you go on defense, he’ll see it as proof.

2. Don’t Let Him Shut You Down

Now, just because he’s defensive and preoccupied with himself, doesn’t mean you should just give up and bury your feelings.

When your needs are pushed aside, they don’t magically disappear…

They come back at a later time, often as stronger emotions.

And your feelings matter just as much as his do and shouldn’t be ignored.

So instead, try to be gentle with him, BUT insist on being heard and understood.

3. Make It About Yourself Again

And finally, you need to make the conversation about yourself again.

Whenever he veers off into his defensive state, he’s making something about himself that was actually supposed to be about you.

So try and help him see that you’re NOT attacking him. (Even if the issue is related to your relationship)

That you just need him to listen and give you room to express your feelings.

This way, you won’t trigger his defensive mode…

Since Karolina and I both fought a lot over this very issue ourselves, and it took us years to finally figure it out and fix this problem.

We were sure to go over the solutions in greater detail in our Rebuild Your Relationship course.

In it, we cover how to express your feelings to him, so that he doesn’t get defensive.

So that he finally gets that it’s not about him, that you’re not attacking him, but you just need him to listen and understand.

We put this course together, so other couples don’t have to go through the tedious process of figuring it out too, and instead get the results they want now.

If you have any questions about men getting defensive when you express how you feel, leave them in the comments section below, and I’ll get back to you.

You can also read more about how to rebuild trust with him which is sometimes tied to defensive behavior.