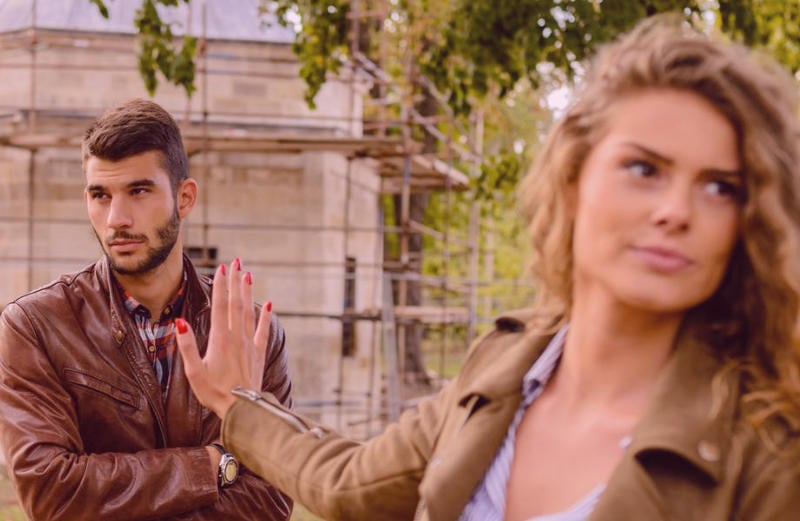 Certain toxic relationship habits are just so prevalent in our surroundings that it might make you feel that they must somehow be ok.

Sort of like smoking in high school, just because everyone does it, it means it can’t possibly be that bad for you…

Unfortunately, this is not the case.

Even though the habits listed here are generally considered “not that big of a deal” they will inevitably damage your relationship.

These are all relatively little things, most couples do. I used to act like this myself too!

Over the years I’ve noticed the negative effects these toxic habits had on my relationship and I discovered healthy alternatives for each one of them!

1. Holding Grudges to Use Them as Leverage

This is an extremely common behavior. Everybody who is in a relationship surely has been holding some grudges against their partner at some point in time.

Holding a couple of grudges is generally not the end of the world.

We all resort to it now and then, sometimes because we’re left with no other choice.

However, holding grudges becomes a really toxic habit in a relationship when a person intentionally lets problems pile up so that they can then use it as leverage in an argument against their partner.

It’s like keeping a registry of all the ways that your significant other has wronged you in the past so that you can use it to make them behave the way you want in the present moment.

This attitude is EXTREMELY DAMAGING to any relationship. Yet I’ve seen countless arguments where couples pulled this on each other! It’s such a common thing!

The truth is, using holding grudges this way is a manipulation tactic that will inevitably backfire.

It can cause a lot of resentment and destroy trust between you and your partner.

I know it sometimes seems like a “strategic thing to do”, but it really isn’t going to get you what you want in the long run.

Next time you pull this move your man will already have his walls up and will likely start firing back.

This toxic habit only leads to an endless cycle of frustrating arguments where none of you ever gets what they want.

I think that the most important thing to understand about using grudges as leverage is that people resort to it because they’re afraid to let their partner in.

You see, holding a grudge is EASY. When your partner does something that makes you upset it and you choose to sulk in silence, you risk nothing.

Pointing out a problem and communicating your feelings, on the other hand, oh that takes balls 💪.

It’s scary to admit that something hurt you. What if your partner just says “you’re overreacting!” or “you’re being unreasonable!”?

But if you truly care about building a happy and healthy relationship, you must be willing to take that risk.

Even though it’s scary, owning and communicating your feelings is the only way you can truly get what you want out of your relationship.

Sometimes it might take an extra effort, but it is possible to make your man hear you out.

2. Making Demands and Not Leaving Any Room for Your Partner to Say “No”

Making demands is another very common toxic habit that a lot of people develop in their relationship.

It’s true that being together entitles you to certain privileges with your partner.

For example, you don’t have to ask their permission every time you want to kiss them or hold hands!

But the real problems arise when people start creating DEBTS OF GRATITUDE in their relationship in order to EARN FAVOURS.

This can start with harmless little made-up rules like “I clean the house, you’re supposed to take out the trash” or “we’re together, so you have to come to dinner with me and my family”.

There is nothing wrong with a healthy exchange of favors as long as neither of you is trying to manipulate the other into doing things they’re not up for.

The problem with making demands in relationships is that it’s inherently manipulative.

When you demand things from your partner you’re INTENTIONALLY not leaving any room for them to say “no”.

Much like when it comes to holding grudges, making demands is the EASY thing to do.

Asking for things, on the other hand, requires a lot of courage.

When you ask your partner for something, you risk them rejecting you.

You’re showing vulnerability by admitting to needing them.

Asking for things builds trust in relationships while making demands destroys it.

Trying to ask for things will make your partner feel closer to you, demanding things from them will inevitably make him more distant.

3. Not Wanting to Admit Mistakes and Resorting to the Blame Game Instead

This one is a classic.

Most arguments in relationships are all about trying to establish WHO IS TO BLAME.

-”You never listen to what I say!”

-“Too sensitive?? You’re the one who got upset in the first place!”

When your partner is pointing out that you’re doing something wrong, it’s easy to get defensive. I would know. I used to react this way too the whole time.

When Gabriel pointed out that I was doing something that was hurting him in our relationship I immediately felt attacked and tried to strike back.

The act of striking back, however, only led to more damage.

At the end each of these kinds of arguments, both of us always ended up feeling hurt and frustrated.

Admitting to doing something that could have caused Gabriel to be upset, used to be REALLY HARD for me.

There was just such a strong notion in my family that you have to be perfect as a woman and that the man is always to blame.

This is something that used to be completely counterintuitive to me:

Unlike resorting to blaming your partner, admitting mistakes generally results in dissipating anger.

Admitting mistakes leaves space for the hurt party to express their feelings and be heard. That makes them relax and actually cuts any argument short.

On top of that, admitting mistakes can actually lead to you and your partner feeling closer and having more trust with one another!

Just because these three toxic relationship habits are extremely common, it doesn’t make them any less damaging.

When it comes to relationships, there really are no fixed rules.

That’s why it’s always important to evaluate your own approach and think things through yourself.

Holding grudges, making demand and resorting to the blame game will leave both you and your man feeling distant and disconnected.

Contrary to this, communicating problems, asking for things and admitting mistakes will make your relationship stronger and healthier than ever.

They say you have to find true love.

Sorry, but that is utter BS.

You build true love by cutting out the toxic habits and inserting the healthy ones in their place! And it takes love and patience to get there.

What are your experiences with the habits listed here? Do you have any questions about them? Let me know in the comments section, I’d love to help out!