How to Get Him to Ask You Out 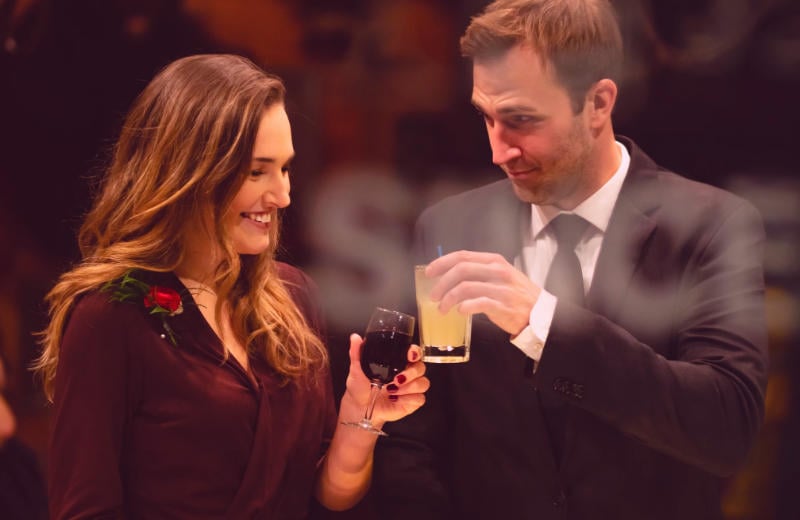 Having a crush on a guy and wishing for him to ask you out can be very exciting and extremely frustrating at the same time.

Gabriel and I first got to know each other at a birthday party of a mutual friend of ours.

After that first party, we texted occasionally and continued bumping into each other at a few other social events.

We flirted and danced together, talked, got to know each other better…

(My crush on him continued growing.)

All in all, it took us THREE MONTHS from the time we met until Gabriel asked me out on our real first date!

Getting a guy to become really interested in you is a process.

How fast or slow your relationship will progress depends on a variety of circumstances.

In this article, I’ll guide you through all the most important steps you need to take to get a guy to notice you and ask you out AS FAST AS POSSIBLE.

1. Putting an Extra Effort Into Your Looks Will Increase Your Chances of Success

Yes, we all know guys care about the looks.

But NOT in the way you were most likely taught to believe.

The man you’re interested in doesn’t need you to be super skinny, perfectly fit and have makeup skills that could land you a job as a professional stylist…

Taking care of your looks isn’t about striving for perfection, it’s about communicating SELF-ESTEEM and CONFIDENCE!

Seeing that you care for yourself so well makes a guy think that you’ll take good care of him too.

Because of this, he’ll see you as a more ATTRACTIVE potential partner.

Being able to enhance your looks with makeup can make you more desirable in men’s eyes.

Girls that are good at makeup are always a bit intimidating.

I used to be a total nerd and had little makeup skills, but I managed to catch up on it all thanks to YouTube tutorials.

Following and learning just one simple makeup tutorial can make a HUGE difference in how people relate to you.

It will boost your CONFIDENCE and make men perceive you as more attractive.

2. Make Him Notice You and Try to Become Friends

Now that you know the general tips to make yourself more desirable to men, it’s time to jump into action and start focusing on how to get your crush to NOTICE YOU.

Before you can get a guy to fall in love with you, you first have to give him a chance to just get to know you.

Guys can be extremely distracted sometimes.

They can be so focused on boasting about their egos and trying to impress everyone around, that they might not notice you at all.

That’s why the important first step in making a guy interested in you, is to come up to him when the moment feels right and start a casual conversation.

Let him know you EXIST, and that you’re FRIENDLY.

Be casual and be yourself, that will be enough to get his attention.

Side note here: in my experience, it’s often enough just come into a guy’s field of view for him to immediately jump into action and start talking to you.

3. Let Him Know You’re Interested by Flirting With Him

Just like when it comes to noticing your existence, guys can be EXTREMELY OBLIVIOUS to a girl hitting on them.

Flirting is a great way to make a guy FEEL that you’re attracted to him.

It’s a playful way of expressing your desires without any strings attached.

You can back out of it any time.

Asking him some playful questions can be a great start.

Flirting communicates to a man that you’re open to being more than “just friends” with him.

Now he knows you and can feel that you’re into him and it’s his turn to make the move….

4. Don’t Push, Give Him a Challenge Instead

If your crush knows that you’re interested and still hasn’t asked you out it might mean two things:

If he’s looking for something else, you can’t force him to change his mind.

The best thing you can do about it is to learn how to recognize the signs and just move on.

You deserve to be with a man who will VALUE and appreciate you.

But if it’s the case two: he just isn’t ready to ask you out just yet, your best response is to give him space.

Guys like when a girl gives them a bit of a challenge. When she pulls away and isn’t always available.

Your crush wants to feel like HE IS THE ONE conquering your heart, not the other way around.

This dynamic is what makes men feel safe and in control.

That’s why when your guy isn’t making the next move, your best course of action is to withdraw and just go do something else.

Go talk to your friends, live your life, pursue your hobbies.

Focus on figuring out the best ways to make him want you from afar and just wait for him to get back to you.

5. If He Still Can’t Take the Hint, Try Asking Him out Yourself

Some guys are just so oblivious to girls hitting on them, there is no way around it.

Regardless of how hard you try, they’ll think you’re just being friendly and aren’t really interested in them.

Another rare case is guys who are so shy, they just don’t dare to ask anybody out.

No matter what the situation is here…

It is perfectly OKAY for a girl to ask a guy out nowadays!

There is nothing wrong with you taking matters into your own hands.

A lot of guys actually like and appreciate it.

One big thing to consider when deciding to ask your crush out is that he might say just say ‘No’.

Nobody likes to be rejected, but guys deal with it THE WHOLE TIME!

And if they can to survive it, SO CAN YOU! 😉

Taking charge and asking your guy out will give you a clear answer, he’ll either say “Yes” or “No”.

You’ll know for sure whether he is interested or not.

Getting a guy to ask you out can be a long process.

When Gabriel and I got to know each other I resorted to all sorts of tricks to get his attention and make him interested.

If it’s meant to be, it will work out.

If it doesn’t, you’ll find someone else.

So don’t worry too much and just go for it!

If you’re still unsure or are afraid that your heart will be beating off the charts when you try to get him to ask you out, we can support you with this in a coaching call.

Here, we’ll create a personalized strategy just for you, to put all the odds in your favor and have him falling over himself to ask you out. You’ll be in an empowered position and will move forward with confidence in your dating life.