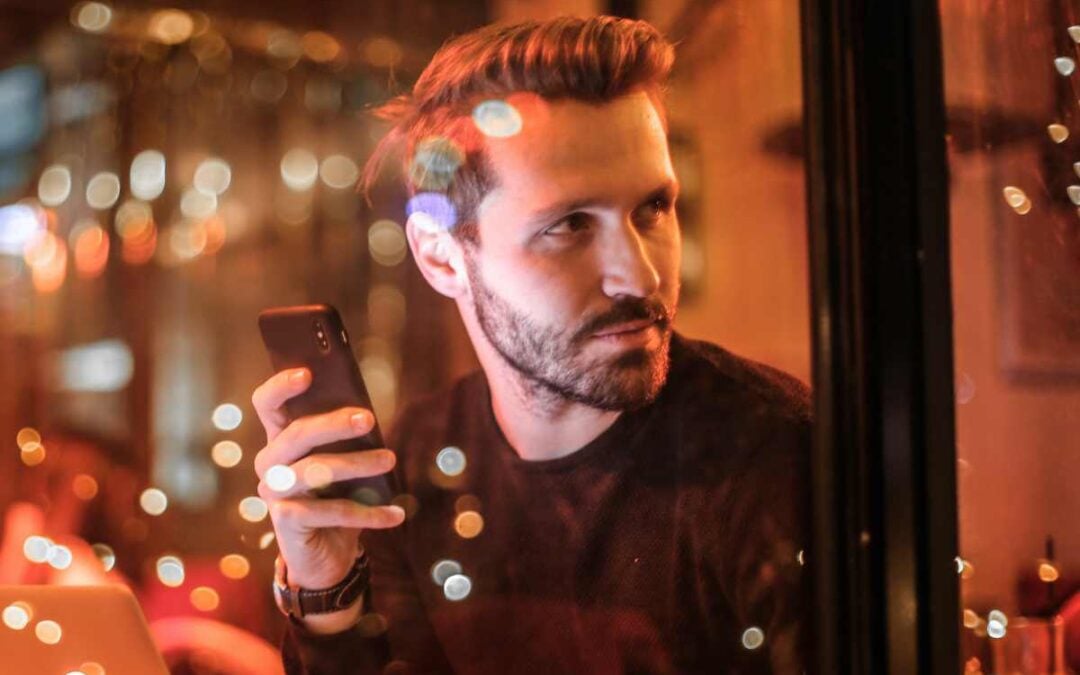 So you want to know how to make him miss you badly? And you want to do so, in the most potent way possible?

Well, whether it’s someone you’re dating, are in a relationship with, or even if it’s someone whom you recently broke up with. I’m here to help you make him miss you desperately!

And we’ll do so, by equipping you with the most devilish of tools to make him come chasing you like a cheetah in heat!

Now, before you use this deadly arsenal, it’s vital for me to explain some underlying male psychology, otherwise these tools might land flat, or worse, BACKFIRE.

So, let’s start with clearing up a common misconception:

Rejecting Him Doesn’t Make Him Miss You

You may have noticed a lot of advice floating around on the internet suggesting tactics that lean towards dismissing him to get him to miss you, including:

What all of these approaches have in common is that they are based on some form of rejection.

These strategies might make him CHASE you, but they WON’T make him MISS you.

Chasing you is a brief phase he will have before getting what he wants from you and then running off again, so you can endlessly repeat the cycle.

Whereas Missing you is his genuine desire to be with and connect with you, which is long-term focused.

And in this post, I’m going to show you how to make him miss you to create a sustainable relationship.

But if you’re interested in a quick result by making him chase you, then these 9 intoxicating texts will help you with that.

With that out of the way, let’s finally talk about…

How To Make Him Miss You

In order to get him to chase you, there are essential Do’s you’ll want to implement and definite Don’ts to keep a close eye on.

The combination of the do’s and don’ts is what really leads to a successful result of him missing you.

8 Essential Do’s To Get Him To Miss You

Let’s start with the things you should definitely be doing. Don’t overwhelm yourself with trying to do ALL of these. Rather, pick out a few that you feel you can do.

So don’t be afraid to spend some time apart. Otherwise, how else will he discover that he misses you?

And to be clear, when I say ‘time apart’ I don’t mean a couple of hours. I mean days or even up to a week.

Let him realize you’re not indefinitely sticking around, so that he can feel a longing to see you and touch you again.

He’s wondering: “Where is she at?”

2. Do pursue your own passions

You know what makes spending time apart a WHOLE lot easier on you?

That’s right, pursuing your own passions.

I get that he might BE your passion, but if you want him to miss you, you’re gonna have to let him feel that he’s not the center of your universe.

Go on that trip you’ve talked about for years, take lessons for that instrument you’ve longed to learn, visit a studio where you can let loose with paints on a giant canvas.

Whatever your neglected passions are, breathe life into- and revive them!

He’s jealous: “Is she pursuing her passions more than she’s chasing me?”

3. Do Spend time with friends

When we’re crushing hard on someone, or are desperately in love, we can forget to spend time with the friends in our lives whose company we so thoroughly enjoyed before that special someone came along.

So, if this is you, then consider taking time to meet up and catch up. Even if it’s that friend who’s moved across the pond or the penpal from way back when who sometimes crosses your mind.

Moving other people into your focus will help nurture old connections and you’ll feel less alone. And in turn, it will help HIM notice that you’re around less and slowly make him miss you.

He’s surprised: “Since when does she prioritize her friends over me?”

4. Do something truly thoughtful for him…

Assuming you know each other long enough (about 4+ months), you can surprise him with a thoughtful gesture or gift.

What’s paramount here, is that it’s truly for him and not for an effect. Spend time to figure out what he’d truly appreciate and would hit home.

Ideally, it’s something that does not require you to actually meet in person.

This way he doesn’t think that you’re just trying to reel him in, but are genuinely wanting to make him happy. No strings attached.

This kind of gesture can make even the most stubborn emotionally unavailable man open up.

In today’s day and age of technology, the chances are slim that he didn’t receive or catch wind of your gesture/gift. So assume that he’s gotten it and is mulling over what it means, maybe he’s even suspicious.

This is why NOT following up can be even more powerful. Because you’re letting him know that you’re not doing it to invoke a reaction from him.

You’re doing it because you care about him. This will make him miss you like CRAZY.

He’s touched: “That was… incredibly thoughtful of her.”

6. Do continue demonstrating your value

If he happens to be the one initiating and reaching out to you, think of these moments as opportunities to remind him of what he values so much about you and ISN’T currently getting.

The qualities you bring to the table are what initially attracted him to you, so refreshing his memory about said qualities will make him miss you and want more.

And you can absolutely tease him here! Be playful and give him a little something, but leave him wanting more.

Another means of getting him to miss you is to show off yourself and your life on social media.

Combining this with what we’ve discussed above, will REALLY get him to notice your absence and want you around again. This means, posting yourself pursuing your passions and meeting with your friends.

He’ll long to be a part of all the good and exciting things going on in your life and won’t want to miss out anymore.

He’s experiencing FOMO: “I wish I was there with her.”

It’s a game as old as time and will never lose its relevance; seduction is the name and bedding is the game.

If you feel like he’s receptive, don’t hesitate to flirt and seduce him. Remind him of all the good stuff he’s missing out on.

Be merciless, torture him, let him feel the pain of not having you in his life.

It goes without saying that you should do all of this in your own style and in whichever way you feel comfortable with!

Whether that’s endless teasing, sexting, sending provocative pictures or anything else you can imagine. You make the rules.

He’s clawing walls: “I must have her NOW!”

5 Definite Don’ts To Get Him To Miss You

Now, with the don’ts you’ll want to try to avoid ALL of them. I know it’s easier said than done, especially when this guy is totally crush worthy -or even more. But do your best to avoid these to increase your chances of getting him to miss you.

Being chased can be endearing and flattering for the first few days, but then it mostly becomes very off-putting for guys.

As difficult as it may be for you, not chasing him plays a part in how to get him to miss you.

Because how is he supposed to notice your absence if he never gets the chance?

So chasing him is a no-no.

A common way of chasing is of course over-texting and over-calling.

This often leads to him being hesitant or taking his sweet time to answer you.

Which in turn can fuel your need to over-text or call, which will then make him even less responsive or even ghost you.

It becomes a vicious cycle. And if you want him to miss you, then over-texting and over-calling are unfortunately not on the menu.

3. Don’t try to convince him of feelings

If you’ve found yourself speaking his feelings for him, you might be falling into the trap of trying to convince him of how you’d LIKE him to feel.

This is especially prone to happen, if he’s an avoidant.

Because he’ll make it so hard for you to get a read on him, that you will naturally want to try to fill in the blanks.

But the danger here is that his silence can lead to you speaking how you hope he feels, rather than how he ACTUALLY feels. Which in turn often leads to guys distancing themselves and definitely not missing you.

So avoiding this behavior is another important ‘don’t’, so that it doesn’t stand in the way of getting him to miss you.

4. Don’t persuade him to meet

I know it can be difficult to hold out when you really want to see him, especially if it’s been a while…

But if you’re intending on persuading him to meet you, know that this will certainly not help you reach your goal.

This is especially true if you’re trying to get an emotionally unavailable man to miss you.

Instead, follow the ‘Do’s’ we covered earlier to help you cope with the time apart. These will be far more effective at enticing him to think of you.

5. Don’t make him the center of your world

Although this is the last point, it not only bears a lot of importance, it also captures the essence of what I’m trying to convey in this post, and that is:

Enjoying your own life is how to make him miss you.

Because it is in living your life and pursuing your own interests that he is reminded of what initially attracted him to you in the first place!

And this will remind him of all of those delightful feelings he has towards you, and he’ll be willing to overlook the issues you might be having.

Just so that he can finally see you again.

If you follow the Dos & Don’ts we discussed here, you’ll find that he’ll miss you terribly and reach out to see you again.

But if he doesn’t respond and doesn’t miss you despite all of these efforts, maybe the problems you guys face need to be addressed first.

And if you’re really unlucky, it might just be the unfortunate case that he’s just not that into you.

If you’d like any help with getting him to respond again (especially if it’s been a long break since you’ve seen each other) then check out our Coaching Calls.

In a call, I’ll listen to your story, and we’ll figure out a personalized strategy for you to get through to him again.

This will include getting into the male psychology and me sharing the male perspective so that you feel clear and prepared on how exactly to get him back again.

Thank you for reading, and let me know what you’ve tried to make him miss you in the comments section.