‘What does he actually want from me?’

It’s a question I used to ask myself a lot in the past.

Understanding the things a man wants from a woman is key to a lasting and loving relationship. Yet, it is a problem many women struggle with even after YEARS of being together with their partner!

That’s because expressing one’s true needs is vulnerable, and when it comes to vulnerabilities, guys are just not supposed to have any.

For this reason, your man will rarely communicate what he wants straight up.

In the domain of giving your partner the love that he needs, he really does expect you to read his mind.

Fear not though, in our 9-year long relationship we’ve managed to solve this puzzle.

These are the 5 things your man wants from you. Giving them to him will make him trust you and bring him closer!

You see, men often act all cocky and confident but deep down they are just as insecure as women are.

It was actually quite surprising to me, but when it comes to being all nonchalant it’s mostly just an act!

The truth is, men need LOTS of reassurance!

That’s why your man really wants you to let him know that he is doing “a good job as a man”.

He wants to know that he makes you feel safe, that you admire him and look up to him in some ways. That he is knowledgeable, smart and brave.

In other words, your man wants to feel like he is your hero.

And the best way to make him to feel this way is by telling him how much you love him!

2. He Wants To Feel Desired

When I walk down the street, I see COUNTLESS men that seem to put little to no attention on their clothes or appearance.

I used to believe it was because they simply didn’t care. In fact, many even TOLD ME that they didn’t!

However, I’ve learned a more sinister truth behind their seeming carelessness.

It’s that men are not supposed to feel desirable!

Much like women are often expected to remain “daddy’s little girl”, men are expected to stay “mommy’s boy” wearing oversized t-shirts and cargo shorts with at least 6 pockets!

So it’s HARD for them to think of themselves other than how mommy treats them.

But don’t be deceived by their ragged appearance and supposed non-care.

He DOES WANT to feel attractive and desirable. He wants you to want him.

3. He Wants You To Support Him In His Endeavours

We all crave the support of our loved ones when it comes to pursuing our hopes and dreams.

Even with increased equality, there is still a strong pressure on men to thrive in the world and leave their mark.

That’s why, when it comes to going after his passions, your man wants you to understand his motivations and encourage him to succeed.

He wants you to agree with him and to have his back. He also wants you to trust him to make the right decisions.

Being supportive of your man’s endeavors will help gain his trust, build him up and make him see you as his biggest ally.

4. He Wants To Feel Safe

Yes, that’s right, men want to feel safe too! Figuring this one out, was a total mind blow for me.

The truth is, men crave safety just as much as women do.

Your man wants to be able to open up to you, to know that you care about him and that you won’t leave him.

He wants to know that he is not alone.

Your guy wants you to have his back and help him out when he needs it. He actually wants to be able to count on you and be emotionally available.

This includes emotional support when he feels vulnerable, say when something in his life hasn’t worked out or his job is weighing on him.

In short, he wants YOU to reassure him and make him feel safe.

But frankly, this is a stereotype that often does more harm than good in relationships.

He doesn’t just want to have sex with you, he wants to feel CONNECTED to you!

This is something he’s unlikely to say to you.

Men are expected to “be strong and show no weakness” and unfortunately, the man you’re with most likely has also been taught that “wanting to connect is weakness”.

So it might be, that the only way he knows to connect is through sex.

But that doesn’t mean he doesn’t want MORE with you.

To him, sex isn’t just about physical pleasure, it’s about him wanting to feel closer to you.

This brings us to the biggest and arguably most important point in all of this.

All the things men want, that we’ve covered so far have something rather simple in common: What he ultimately wants is to feel close and connected to you.

The problem is, men have often been programmed to reject nurturing intimacy and can thereby subconsciously sabotage it in their own relationships.

If you find yourself in a situation where you’ve made endless efforts to make things work with your partner, but he just doesn’t respond the way you’d hope he would, then this might be the very reason.

It’s something we actually struggled with in our own relationship and also why we created the Rebuild Your Relationship course. 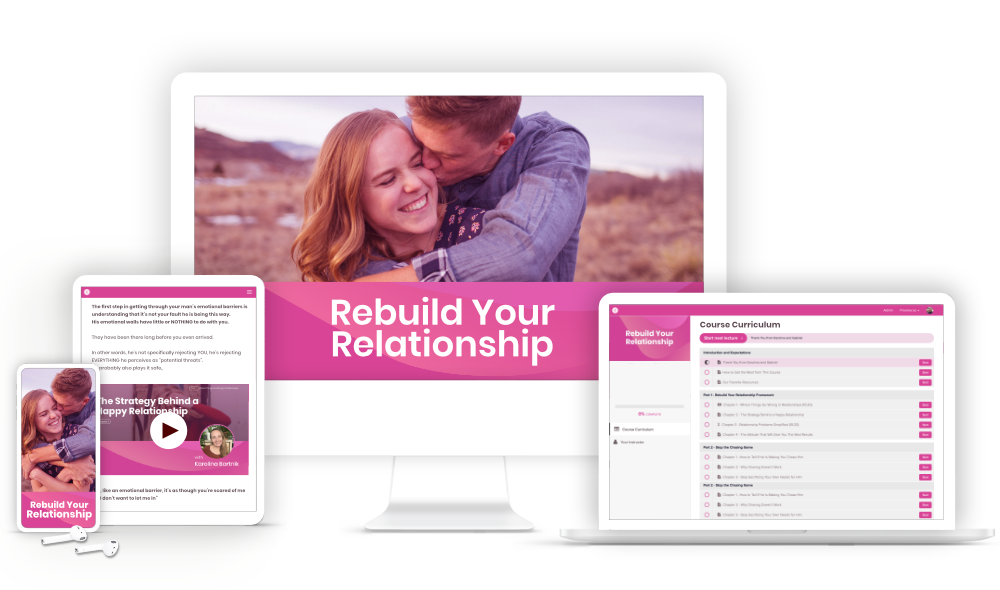 In it we teach you the things men really need from a woman (That they might not even be able to convey themselves). And we’ll show you how to approach him with a mindset and tools that will finally allow you to get through to him and have him respond the way you want.

If you have any questions or thoughts about what men want, please leave them in the comments section below and we’ll get back to you.

Also if you’d like to read more about this topic, you can check out our post 5 Common Mistakes That Drive Men Away which you might find helpful as well.