How to Stop Fighting in Your Relationship 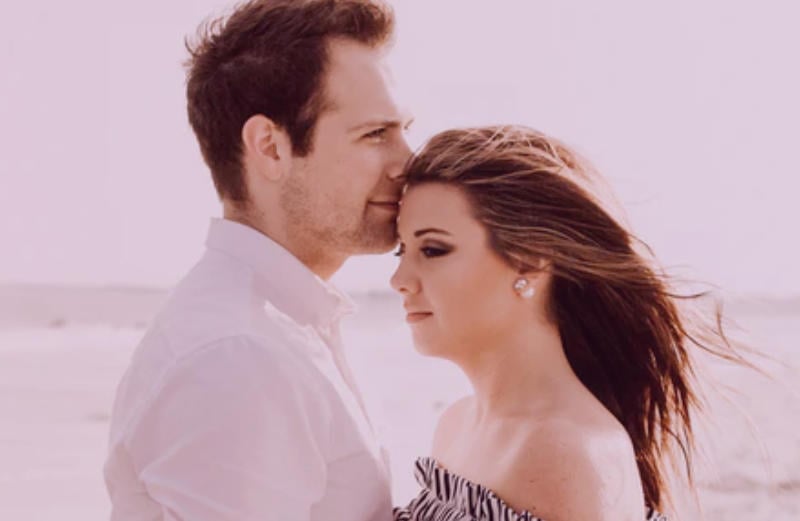 If you’re having the experience of fighting over the smallest things in your relationship or seemingly arguing over the same topics time and time again.

Then know, that you’re not alone with this problem.

Everybody has it and we did too!

I’m going to share Karolina’s and my story on how we learned to stop fighting and break down the strategies and attitudes we developed, so that you can apply the lessons we learned, to your relationship!

This will help you gain clarity of why fights happen in your relationship and what you can do to reduce and even stop them.

When Karolina and I got together, we had our typical honeymoon phase and over the months issues began to surface.

The amount of fighting steadily grew and then escalated to an all-time high. We fought just like any other couple, over small and big things.

But we did our level best on trying to resolve fights together and understand why we were fighting. (So that we would fight less it in the future).

We didn’t know what we were doing at the time, but over the course of the years, the fights in our relationship took a steep nosedive. 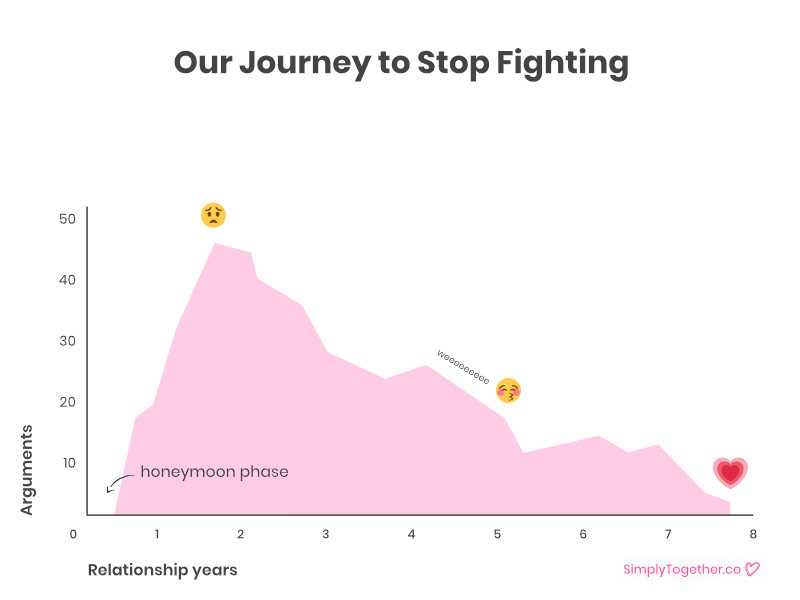 What’s worth mentioning here, is not only did our fighting go down, the time an argument took to resolve went down as well! (Ranging from a few days of hostility to being solved within minutes.)

As all of this happened, there was gradually more space and energy to ENJOY our relationship.

For every fight we didn’t need to have any more, we had each others pleasurable company and space to do activities together.

We could invest all of the freed up time and energy into building the future we wanted for ourselves.

Before I get into the How to stop fighting, I’m going to briefly cover what a fight is and why it happens.

Gaining a deeper understanding of relationship conflicts, in general, is a helpful first step to solving this problem.

Let’s jump into it then.

Simply put, fighting is a conflict between two people in a relationship, where either or both disagree with the other’s statements, actions or behavior.

Here’s a brief overview of, what couples fight about most and how they do it.

What Couples Fight About

These are universal topics that affect all of us and are often recurring.

With Karolina and myself, they would often start out as small things, then escalate into full-blown arguments.

Often the underlying reason for fighting didn’t even surface enough, to become the focus of a discussion.

Instead, we often lost sight of what the fight was even about to begin with!

This can lead to an endless “Who is right and wrong” with neither side wanting to back down. This happened to us a lot at the beginning.

What Happens During A Fight

What’s important to note here, is that these behaviors are the result of all previous efforts to negotiate have failed.

It’s a last resort. Even if you might seem to get there very fast.

Now, as I’m sure you’ve discovered for yourself, the above-mentioned methods are not very effective in getting you, what want from your partner.

In fact, they don’t resolve matters or elevate either of you.

On the contrary, they often reinforce the issue and tear you down.

We fight because we’re not getting what we need from our partner.

We’ve reached our limits and resort to forcing or manipulate one another into the behavior we need from them.

The fighting in a relationship may seem very complex and frequent. But if you listen and dig deep enough, you’ll often find that it boils down to very fundamental needs not being met.

“When you don’t take care of our home, I’m afraid it means you don’t care about me” or

“When your mother made a snide remark about me and you didn’t call her out on it, it was telling me you believe I deserve to be treated badly”

On the surface, these are all very different scenarios, but they all have one thing in common.

A person is talking about feeling unwanted, uncared for or unloved. To illustrate this point: 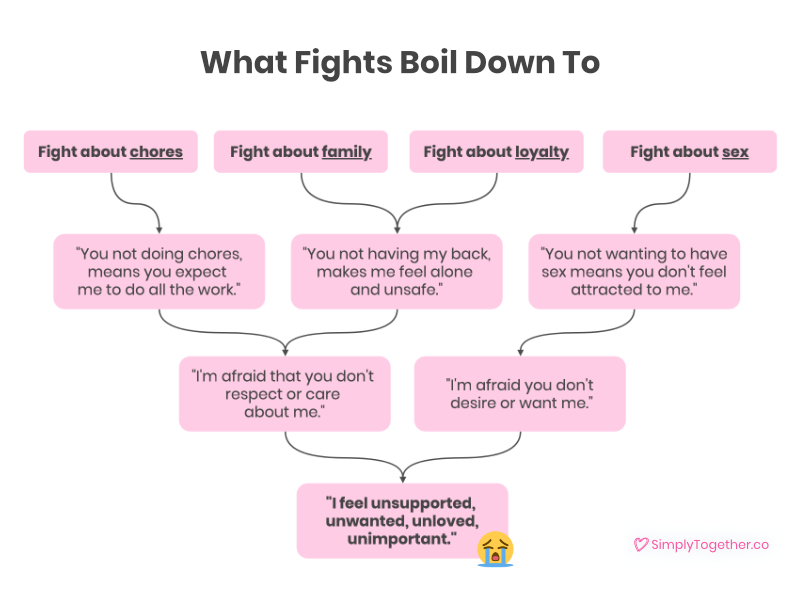 Now, I cannot emphasize this enough.

No matter how complex a relationship problem may seem, even though fights can seem to be going nowhere and spiral out of control. If you listen closely, they all have the same underlying problem.

Somebody isn’t getting what they so desperately need. Which they don’t know how or where else to get!

Even if it is pragmatic problem, dig deep enough and you’ll find the counter piece (an emotional need not being met).

If it remains unaddressed long enough, that’s where a person would start to fight, in order to forcefully get what they want.

3. How To Stop Fighting In Your Relationship

In order to stop fighting in your relationship, you need to identify the underlying reasons behind your fights and address them.

So how do you get down to the underlying issue of an argument?

Write Down What You Fight About & Keep Track

Most couples fight about the same issues over and over again. These might appear to be unique arguments over different matters, but that’s just what’s happening on the surface.

Surface argument nr. 1: I was upset at Karolina, for not seeing the value in a book we read together.
Surface argument nr. 2: I was frustrated at her when she didn’t remember what I had said to her the previous day.
Common underlying issue: I didn’t feel heard or taken seriously.

Funnily enough, on both of our sides, we had the same underlying issue. That we didn’t feel taken seriously by the other.

Keep track of your arguments and see the ones that feel or might be similar and seem to repeat. This will help you identify underlying issues and you’ll be able to address them sooner.

We’re All Unique, But Similar

Everybody is a unique person, with their own background and experiences. But when it comes to our emotional needs, we tend to be quite similar.

Throughout our eight years of relationship, talking to other couples and families, we’ve observed that these are some of the most frequent issues that cause couples to fight:

In our experience being able to identify the underlying issues in arguments, is half the battle.

You gain a whole different level of understanding in the relationship and get where both of you are coming from.

When you identify these issues while fighting, you might come to realize that you both have the same unmet needs!

The Power Of Addressing The Underlying Issue

As I wrote earlier, people resort to fighting because of an unmet emotional need.

So understanding the underlying issue is incredibly powerful because it allows you to meet your partner’s needs directly.

Once they feel like you get what they are missing, they’ll never have to resort to fighting techniques to try to extort that thing from you anymore.

It is such a powerful tool because it allows you to obliterate countless surface arguments all at once.

That’s what made it possible for us to reduce the number of our arguments so drastically.

But we all know it’s never really that simple, is it?

I’m afraid it’s time to drop a bomb. So buckle up and let’s get through it together!

Half of the time on your way to discovering that unmet emotional need, that is causing your fight, you might find it REALLY REALLY HARD to admit that your partner has an unmet need.

And vice versa, sometimes you’ll find that your partner is totally unwilling to acknowledge an unmet emotional need of yours, no matter how hard you try.

The reason for this is, that often in our childhood our parents could not meet that need for us.

I really needed Karolina to be more affectionate. However her family had a strict ‘no affection’ policy. They literally waved each other goodbye from a safe two meter distance and never hugged.

(You can imagine what it was like when Karolina introduced “Gabriel the hugger” to her family, her mother was thrilled. )

So when I needed Karolina to be more affectionate, she was like

“What do you mean affectionate? Does that mean you want to have more sex?”

She was totally unaware of her own unmet need for affection and consequently could not understand why I was upset about that.

An emotional blind spot is something you or your partner is literally blind to.

There is nothing you can say or do that will open their eyes. You can try shout, argue or cry but they simply will not see or understand.

Believe me, for YEARS I’ve tried to make Karolina see certain blind spots she has and vice versa, to no avail. We tried every trick in the book, I tell you, neither of us f*king budged.

When you’re having a fight with your partner and you’re trying to explain something to them, but they’re just stone walling.

*Alert* This is most likely a blind spot scenario.

They literally don’t understand what you mean. Heck they probably think YOU’RE mad for getting so upset about seemingly nothing.

What To Do About Blind Spots

The only way to deal with blind spots is to switch your attention from what you are upset about, to what they are blind to.

This is probably an incredibly touchy topic to them and they’re most likely not even aware of that. So time for some surgical precision. No pressure.

Everybody comes with some form of emotional baggage.

In order for a relationship to function, both parties must work together, chip away at their issues and limitations that were imposed on them when they were young.

I spent countless hours getting Karolina’s side and that’s what helped her become more affectionate towards me.

It took me being understanding, patient and affectionate towards her, for her to acknowledge the absence of it in her life and to learn that skill.

Now, it’s no longer a topic of discussion and I’m a happy man

There were just as many scenarios where Karolina needed something from me and I was blind to it and couldn’t give her what she wanted!

We addressed these, the same way!

Stopping fights in your relationships is a long term project and it requires both parties to try and make it work.

Believe me. You both have issues. (I didn’t want to hear it for the longest time)

We’re logical creatures and there is always a reason behind our behaviour, no matter how irrational it may seem at times.

Be gentle and patient with one another, never stop talking and don’t stop believing!

What are your experiences with fights and how have you solved them? Let us know in the comments!